Top Ten Tuesday is a weekly meme which was created by The Broke and Bookish and each week those lovely ladies decide on a topic around which you create lists (because who doesn’t love a good list) of ten books that fit the given theme. This week’s topic is based around Top Ten Best Books I Read This Year. There’s a lot of freedom with this one, to choose the top releases of 2015, or simply the 10 best books you read in 2015 or the top of x genre you read, but I’ve had a look over how my reading looked this year and settled on: Top Ten YA Fantasy I Read In 2015.

The reasoning behind this is that I always say I enjoy fantasy but 2015 was the year in which I realised, what with university and assigned reading, I hadn’t actually read that much fantasy lately. This coincided with discovering Booktubers such as Sam from Novels and Nonsense and Lindsey Rey and Reagan from PeruseProject, all of whom read a lot of fantasy. I’ve discovered some books via their channels that I wouldn’t ordinarily and I also have a lot of the recommendations now on my “project books” TBR list to get to in the future. So, it’s safe to say, in the last year or so, I’ve learnt about a lot about what’s on offer in the fantasy genre, particularly the YA and urban fantasy genre which I hadn’t actually been all too aware of before Booktube. So, my tentative forays back into fantasy have been varied this year and I thought I’d take this opportunity to celebrate the top 10 of those I read this year.

I’ve had the pleasure of reading a few series this year so I’ve included any of these marathon reads as just one spot because I can. For the sake of this post not being overly long as I gush about each book, I’ve wrote mini explanations for the books that take the #10 to #2 spots and a slightly lengthier explanation for the books(s) that holds the #1 spot. It’s safe to say any of these choices come highly recommended if you’re looking for a YA fantasy read. So without further ado… 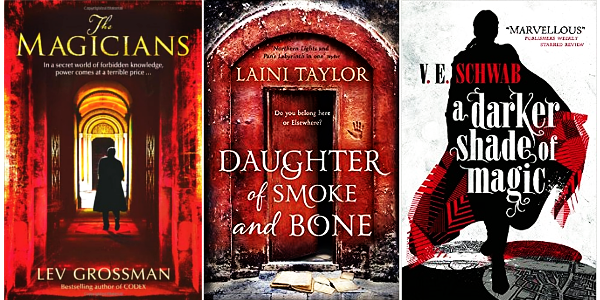 The Magicians is that boundary between YA and adult fantasy. Set in a selective magical university this is nothing like Hogwarts, and all the more interesting for its more overtly mature and jaded tone. Daughter of Smoke and Bone makes an appearance on this list simply for just how evocative Taylor’s beautiful writing is, whether she’s describing the hustle and bustle of a bazaar in Morocco or the sprawling labyrinthine streets of Prague. A Darker Shade of Magic is a wonderful and fun adventure that has its surprisingly really quite dark moments, but for the most part I felt like I’d grabbed onto the tails of Kell’s rather spectacular coat and didn’t want to let go any time soon.

An Ember in the Ashes was originally marketed as a standalone novel (which is what set it apart for me right away even though that’s since changed) set in a dystopian society based on Ancient Rome, the aspect which immediately drew me into the story due to my focus (at the time) on Shakespeare’s version of Rome in his Roman plays. What can I say, I suppose I enjoy reading about deeply socially stratified societies? The Graveyard Book is a Neil Gaiman story so (unsurprisingly) it manages to be fun and frightening, a story not just for children but for everyone with some really wonderful nuggets of whimsical prose for which Gaiman is famed. Set in a graveyard, orphan Nobody Owens is adopted by the ghosts that inhabit it and it really does take a  graveyard to raise a child! Shadow and Bone is the first in Leigh Bardugo’s Grisha trilogy, which I pretty much marathoned this Autumn. It’s not the most expertly plotted, paced, or written of trilogies but by god is it compulsively readable. Some real nuggets of brilliant characterisation amongst some of the more predicable YA fare.

Confession: I tried to read the Percy Jackson books and found it way too childish, so I couldn’t possibly say why Riordan’s latest offering of The Sword of Summer caught my eye past the fact I love dabbling in Norse mythology. (Yes, it’s true, the reason I enjoy Marvel’s Thor films aren’t purely based on Hemsworth and Hiddleston – shocking but true!) But Magnus Chase is a bit of a sarcastic arsehole so, naturally, I love him. The Bone Season annoys me because I need to know how someone so young has developed such a wonderful fantasy book! Set in dystopian London and Oxford, Shannon has created a world which I know she’s barely scratched the surface of in her currently published books – I highly anticipate the rest of Paige’s journey. The Queen of the Tearling was on my radar simply because of Emma Watson. I’m glad I picked it up because, despite my initial skepticism, Johansen’s book is actually very much focused on the politics of a young girl being placed on the throne, something which isn’t explored quite as cleverly or interestingly in other examples of the trope that I’ve read previously.

It’s quite hard to describe what on earth Maggie Stiefvater’s YA urban fantasy series is about without it taking hours, getting lost halfway along the way, and spoiling it entirely. If I say a group of private school boys, a maybe sleeping Welsh king, a house-full of supernaturally-inclined women, some extraordinary dream powers, and leylines… that about covers it but makes very little sense, I know. Stiefvater’s Virginia-set urban fantasy centres around Blue, a teenage girl who, throughout her life, has been told she will cause the death of her true love. Enter this group of four rather interesting Aglionby school boys at Blue’s workplace, and things spiral from there. It’s a unique concept and just when you think you know what’s going on, Stiefvater throws another spanner in the works. I’m eagerly anticipating the fourth book in the quartet, The Raven King, and I can easily say the series were some of the best books I read this year, let alone the best YA fantasy I read in 2015.

So there we have it, those were my Top Ten (/more) YA Fantasy I Read In 2015. It’s been a good year for branching out a little and just unapologetically reading something, regardless of what age range it’s intended for, or how complicated (or not) its intentions are. Sometimes you just want to read a semi-predictable adventure in a fantasy world, you know?

Have you read/enjoyed any of my picks? Any of them on your TBR? What Top Tens did you decide to do this week? Link me and comment below, I’d love to continue this discussion in the comments!