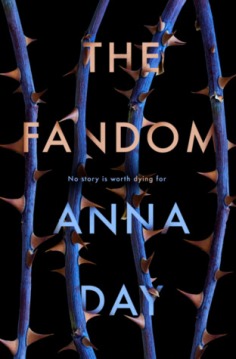 “No story is worth dying for … is it? Violet and her friends love being part of the fandom for The Gallows Dance. But at Comic-Con, they’re somehow catapulted into the story itself – for real. Trapped in a twisted world where they’ve accidentally killed the original hero, Rose, there’s only one way to survive: Violet must fill Rose’s shoes and put the plot back on track… A fast-paced, genre-flipping YA fantasy adventure from a brand new author, writing in homage to the best YA fiction.” (Synopsis from the publisher)

“… or perhaps it’s the canon again, haunting me, dragging me to the gallows.”

It’s difficult to describe why I didn’t get along splendidly with The Fandom – would it be cliché to say ‘it’s not you, it’s me’? I completely understood the concept of this book, and I was definitely behind it 100%, but something in the execution just didn’t entirely work for me. I say this as someone who is kind of “over” young-adult dystopian novels at this point – they’re not my cup of tea really, but if they’re yours then obviously go for it! At times, the book felt less of a pastiche or send-up of the usual tropes of YA dystopians and just became flat-out YA dystopian, complete with all the bugbears I have with the genre. Again, it’s not entirely the book’s fault but anyone who even casually reads the genre, will probably be able to quickly guess at what twists await within. Although, props must be given to Anna Day, because the actual reasoning for the gang’s falling into the world of the story was genius – I loved that plot revelation and I did not see that “big reveal” coming. It had an internal logic which I enjoyed, the reasoning held up, even if the rest of the world didn’t quite do so for me.

For me personally, the characters don’t quite break the mould enough to be revelations. Likewise, the main character infuriated me (as many YA heroines do) because of how stupid she seemed at times. This is always going to be the danger with first-person narrators, and the reason that I vastly prefer third-person narrative voices  – with first-person narration, the character’s inner voice is intrinsically self-centred and unaware of the motivations of others, by its very nature, so it is always a balancing act for any author to reveal just enough for the reader to assume more than the character themselves knows at any given stage of the narrative. I felt personally that the balance was slightly wrong, and the narrator/main character suffered for it. Out of a desire to not spoil it entirely, I won’t say much more, but let’s just say it took Violet a long time to work out why she could hear her parents’ voices in her head and I thought it was the most obvious plot device so I wanted to shake her into understanding. I would ordinarily let this sort of thing slide for a character who was part of a normal YA dystopian because, well, they’re a character who doesn’t have knowledge of YA dystopians, but the entire point of The Fandom is that Violet is a fanatic about a YA dystopian book so, surely, she should be a little smarter about everything as she has that knowledge of how such fictional worlds operate? I recognise that this is easy for me to say but I would probably fall apart too if dropped right into a beloved book!

However, given its title, I expected to love this because I love the entire idea of fandoms. They are communities built around outpourings of passion and love for another’s work, and the connections that are made because of this shared interest can then build more connections and communities, as well as more creative works. Unfortunately, a couple of elements of how fandom was portrayed actually irked me in this novel. One, what the hell kind of Comic Con were they attending where photo-calls with the one of the stars attending were only a tenner (or small enough of a multiple thereof that they paid using actual £10 notes)?! Likewise, such photo opportunities tend to be bought at the time of purchasing the ticket to the convention itself, not really on the day, due to the amount of planning and scheduling such photo-calls take, especially for high-profile celebrities. So that didn’t really ring true, to my experience at least. Additionally, throughout the narrative, Violet, Katie, Alice, and Nate constantly refer to The Gallows Dance as “the canon” but to the point of it seeming not quite genuine? It seemed a somewhat forced expression (like when your Nan says “the Eastenders” rather than just “Eastenders”) so it didn’t necessarily flow naturally with the rest of the conversation, and its constant repetition made this seem like a glaring beacon.

Admittedly, the book does have a tendency overall to repeat stock phrases – ‘as some YA novels do’, you might say, but it seemed like it was succumbing to this necessary trope, rather than playfully sending it up it which I presume is the overall intent of the book? If I had to hear about Willow, the “hero” of The Gallows Dance and his “triangle of honey-coloured skin” one more time, I was going to button up his shirt to the neck myself. Likewise, practically every time Violet’s friend Katie was mentioned, a reference was made to her “soft Scouse accent” – it went further than a description, it became her identifier which, to me, made her become a one-dimensional character that was never allowed to grow beyond this initial labelling of her by Violet. Katie was the token Scouser, if you will. Given I am now living in Liverpool, perhaps I’m just more sensitive to this sort of portrayal, but I just felt like Katie wasn’t given any time to properly exist beyond Violet’s perception of her – again, this is an unfortunate (but intrinsic) by-product of using a first-person narrative to convey your story. Her more colourful swearing was rather excellent though.

Speaking of friendships, I wasn’t entirely comfortable with the way Violet shit all over her friend Alice, essentially for what seemed like two reasons – one, because she wrote fanfic, and two, because she was conventionally pretty. Case in point, using a direct quote from the book: “OK, so Alice has dated the odd footballer, the odd boyband (yes – the whole band). But she always returned to her keyboard, tapping out her fanfic…” Firstly, I don’t understand why anyone so entirely invested in a book would object to there being more of the book through people’s reimaginings in fanfiction. Most people I know who participate in fandoms love any piece of fan appreciation, whether it’s fanfiction, fanvideos, fansites, anything. So it seemed a little… off to me that Violet would hold so much resentment for her friend for being successful at writing fanfiction. Secondly, the ‘being jealous of a friend because they’re pretty’ trope was somewhat overturned, but not enough for me. The entire idea of The Gallows Dance is centred around genetic enhancing of humans (“gems”) and those that are ‘inferior’ are branded as such (“imps”) so it seems counter-intuitive to me that Violet would hold a natural inclination towards being judgemental of Alice because of her beauty, given that she knows how this sort of thinking led to societies such as that of the novel’s where attaining a physical perfection allegedly makes you one of the elite, but is highly problematic. There was deeply interesting character development that occurred in their relationship, however, during the climax of The Fandom, but I actually somewhat found myself on Alice’s side, because it seemed like Violet wanted to believe the worst of one of her best friends simply because she was pretty. I don’t know, that rubbed me up the wrong way slightly and, whilst I was heartened by the conclusion of the story, I couldn’t quite remove the initial bad taste from my mouth. It might be that I was overly sensitive regarding these issues, and they really don’t play HUGE parts of the story line, but it was something that honestly spoilt my overall enjoyment of the book so I couldn’t not mention it.

What did I like then, besides the original concept? Nate. Nate was adorable and excelled past being just the tag-along younger brother within mere pages. He proved his worth as both an individual and as a character within the larger story. He also provided some much needed relief when his sister was irking me, which is never a bad thing. Likewise, I actually really enjoyed the characters from within The Gallows Dance – for one, Ash was a wonderful character and I was SO relieved that he didn’t fall victim to the puppy dog label he was originally dubbed with as part of the stereotypical love triangle between hero, heroine, and her lapdog. He grew to be so much more and, for me, this was one of the unexpected strengths of The Fandom. He had some of the traits of a puppy-dog but this never seemed insincere or forced. The connection between him and Violet also served to highlight the superficial and flimsy nature of the connection between our “hero” Willow and Violet – this was actually one of the strengths of the novel because it perfectly highlighted how the hero/love interest of such stories can often be elevated to mythic, perfect status due to their love for the main character, despite the inherent flaws or ingrained attitudes that haven’t changed at all just because they happen to have found a kinship with someone of the allegedly lower social order in their given dystopian society.

It may seem like I am suggesting that The Fandom wasn’t a great book – that’s not my intention at all, I’m just honestly recalling some of the niggles I had. Little niggles such as these might very well not bother a fellow reader at all but, for me, they did and so they were compounded and I just didn’t quite buy into the premise of the book because of them. That is not at all a reflection of Anna Day’s writing abilities, or indeed the original concept (which, once again, I loved), it just was missing something and didn’t quite gel for me; because of this, I couldn’t suspend my disbelief, which is pretty much a deal-breaker when it comes to fantasy narratives, especially one so original and imaginative like this. Ultimately, The Fandom proved to be a little disappointing for me because I had been anticipating the book’s release so much but I would recommend that you try this book for yourself, especially if you’re more of a lover of YA dystopian than I probably am.

“Hope starts as a little flower.”

3 thoughts on “Review | The Fandom by Anna Day”