Teaser Tuesday is a weekly meme created at A Daily Rhythm. Its simplicity greatly appeals to me since all that you need to do is grab your current read, open to a random page and share two “teaser” sentences, being careful about spoilers. 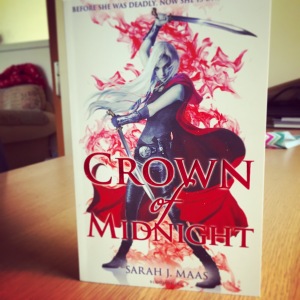 This week I am reading the follow-up to last week’s teaser book, the second book in Sarah J. Maas’ Throne of Glass series: Crown of Midnight. I’m excited to continue on with this series since I’m told by most that the series, if anything, improves with each book. This is something which I’m glad to hear since I enjoyed Throne of Glass enough but I could see so much more potential in it that wasn’t unlocked. (I gave the series the benefit of doubt and amused that all of these points would be addressed in the subsequent books – or at least I hope so since I bought the rest of them!)

As this is the second book, I’m going to bypass giving a synopsis of Crown of Midnight since it could ruin the first book for those who haven’t read it. (But if you would like one, you can find the synopsis on Goodreads here) Likewise I really tried to find a teaser that wouldn’t spoil Throne of Glass but that’s rather tricky, so I decided on sharing the opening lines of Crown of Midnight, which I don’t think entirely ruin the first book past what you could assume  anyway given there are four books currently published in this series.

“The shutters swinging in the storm winds were the only sign of her entry. No one had noticed her scaling the garden wall of the darkened manor house, and with the thunder and the gusting wind off the nearby sea, no one heard her as she shimmied up the drainpipe, swung onto the windowsill, and slithered into the second-floor hallway.”

Do you have a Teaser Tuesday? Please do share/comment below!