Welcome one and all to this week’s Top 5 Wednesday post! For those of you who don’t know Top 5 Wednesday is a weekly meme/challenge which was created by the wonderful Lainey from gingerreadslainey and is now overseen by the equally lovely Sam from Thoughts on Tomes. Every Wednesday, participants devise their Top 5 based on a given topic.

This Wednesday’s topic is Nostalgic Ships: discuss the first fictional couples you ever got butterflies over, or couples you used to be really into when you were younger. I’ll be honest, when I first heard this week’s topic, I didn’t think I’d be able to think of (read: remember) my earliest ships. It turns out I was wrong: a quick think back to some of my favourite childhood and pre-teen reads identified couples I adored pretty damn quickly. So it turns out I was a bigger shipper than I thought I was!

5. Michael/Mia from The Princess Diaries series by Meg Cabot

Is there anyone who read The Princess Diaries and didn’t find Lily’s older brother Michael hot? It was painfully obvious from the get go that Mia’s little crush on Michael would only get worse/better as the series went on. Admittedly, I “out grew” the series at about book 6 so I don’t know how this ship fared as they got older (not well, I assume?), but I used to LOVE Mia and Michael because of that ease of friendship which blossomed into more. I was disappointed when Michael didn’t stick around in the film adaptations to be honest, but his “replacements” are pretty damn appealing too so I’m not too mad about it! Even so, Michael and Mia will always hold a weirdly nostalgic bit of my heart.

END_OF_DOCUMENT_TOKEN_TO_BE_REPLACED

This post comes to you from nostalgia, which I’ve just been hit full in the face with, due to seeing the Matilda at 30 marketing. For those unaware, to coincide with the thirtieth anniversary of the book, Puffin have teamed up with illustrator Quentin Blake to produce special editions of Roald Dahl’s Matilda with brand new covers, each reimagining the eponymous protagonist as a 30-year old women and defining her by her career.

When I initially saw the marketing, I was (oddly) a little horrified… and confused, and mainly horrified because of this confusion. You see, I misread the publicity and thought that Quentin Blake had written some kind of new story of “Matilda at 30”, imagining her in turn as Chief Exec of the British Library, a World Traveller, or an Astrophysicist. I thought these were original/new stories featuring a beloved character. When I thought Quentin Blake had written 3 different stories about Matilda’s career at 30 I was confused why the illustrator was suddenly turned author but I thought, ok, maybe they’ve dug up notes from Roald Dahl or they’ve ran with a really great idea, and I guess it wouldn’t be so bad to get an idea what her life might have turned out like, even if I would mostly prefer to think of a beloved childhood character locked in time, at that childhood age, and not a year older. I might have aged, but she doesn’t, she remains a child forever. (I have the same feeling when I see the likes of Nicholas Hoult or Macauley Culkin as grown adults – no, how dare you age, you should stay the ages of your About a Boy and Home Alone characters!) 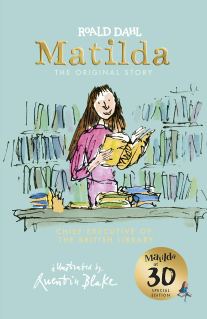 END_OF_DOCUMENT_TOKEN_TO_BE_REPLACED

As people we are all inevitably shaped by the media and culture we consume. This is especially true of our formative years, especially childhood. I think that’s why any books, films or TV shows that we enjoyed as children hold a strange and special place in our hearts, even as we get older and even if we might notice ‘problematic’ things about them.

This post is inspired by the wonderful Cinzia whose videos I adore and who does a sort of annual favourites video which she titles, for example, Books That Made Me 2015. These aren’t just books that are her favourites of the year; they are the books that contributed a more lasting impact on her life in that given year and whose effect will last many years into the future. This got me thinking about my own favourites, the books that “made me”, and I felt like a wander down nostalgia lane in the form of revisiting some of the books I read as a child that I think contributed into making me the reader, and the person, I am today. I thought it might be an interesting feature post to share with you lovely folks, and perhaps we could start a little discussion about what childhood favourite books made you into the reader you are today?

Even more timely, earlier today I came across Comma Press’ blog from their staff talking about their favourite childhood books in honour of World Book Day today. Today seems like the perfect day to publish my own blog post dedicated to the books that came to me as a child reader and still influence the reader I am to this very day. This is going to be a long one, kids, so buckle up…