Review: Aristotle and Dante Discover the Secrets of the Universe 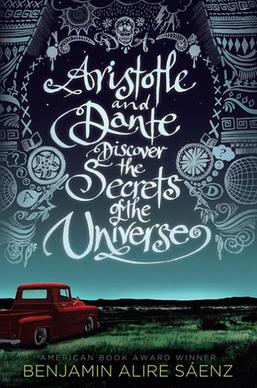 Title: Aristotle and Dante Discover the Secrets of the Universe (2012)

I open this review with a confession: I underlined so many quotes in this book. I’m generally not a person who underlines or annotates novels for the simple reason that I’m an English Literature student so any time I do annotate, I’m probably doing required reading. Call me crazy but I like to be able to read leisurely too. But within the space of maybe 20 pages this book just begged me to start underlining it. Why? Because this coming-of-age, relatively simple story, told via the first-person narration of Ari, is beautiful.

“I hated being volunteered. The problem with my life was that it was someone else’s idea.”

Set in 1987 Aristotle and Dante Discover the Secrets of the Universe opens with Ari’s sense of boredom, misery, and loneliness as he wakes to the sound of the radio playing Heart’s “Alone”. What follows is the simple story of the meeting of two boys named Ari and Dante who discover that the secrets of the universe might not need to be so grand as the meaning of life or if there’s life on Mars. Instead, they discover some important lessons about identity, family, sexuality, and, above all, friendship.

“But love was always something heavy for me. Something I had to carry.”

It’s honest, brutally so, and it’s raw and, yes, sometimes Aristotle is a little whiny and dramatic and self-indulgent in the way only seventeen-year olds can be. But that is why I loved it – it actually authentically sounds like a teenager. It’s not patronising and it’s not jarringly philosophical (not all teenagers have existential crises expressed in perfect quirky, witty quotes, John Green). I have heard people criticise this novel for Ari’s narration, as he reveals simple home truths as though they are said “secrets of the universe”, but I reckon that’s actually deliberate and the point of the novel – we’re in the mind of a seventeen-year old boy and everything feels like an earth-shattering revelation because, believe it or not, he doesn’t know everything about the world or, most importantly, about himself. He’s trying to figure it out and that is something that I think we never really stop doing, regardless of whether we’re a whiny adolescent or a supposedly functioning adult. Now, I can’t speak for whether Ari’s narration sounds like a teenage boy but I’m willing to bet it comes a lot closer than many young-adult novels I’ve read.

“Senior year. And then life. Maybe that’s the way it worked. High school was just a prologue to the real novel. Everybody got to write you — but when you graduated, you got to write yourself.

Aristotle and Dante Discover the Secrets of Universe is wonderful in its simplicity. It doesn’t particularly have a plot, at least not a grandiose, sprawling adventure of discovery and bravery, even if both of those things are presented in such a more realistic, honest, domestic way than if this novel had involved, say, crazy, spur-of-the-moment roadtrips across the US as a way for Aristotle and Dante to “find themselves”. The beauty in this novel is the skill with which Benjamin Alire Sáenz takes a relatively simple concept (a lonely teenage boy) and setting (El Paso, Texas) and creates such relatable characters and family dynamics that you can’t help but recognise, no matter how similar or different they might be from your own circumstances. Everyone, at least, I think understands the feeling of your life seemingly written by others (parents, teachers, friends) and that innate desire to take the pen away from them and direct your own story, no matter how little clue you might have about the direction it might take, and yet being so scared to take over the responsibility for what is to come.

“I don’t always have to understand the people I love.”

Overall, I urge everyone to read this because, even in spite of yourself, you’ll find yourself wanting to underline so many seemingly simple but, above all, honest quotes. Just brilliant.

3 responses to “Review: Aristotle and Dante Discover the Secrets of the Universe”