Courtesy of the wonderful Lainey, this week’s Top 5 Wednesday topic is pleasingly ‘Banned Books You’ve Read’, to coincide with the American Library Association’s Banned Books Week running throughout this week. As a cursory look at the ALA’s website will reveal, most books that have something to say will have, at some point, irked a lot of people to the point of them demanding its removal from the nation’s bookshelves and classrooms. However, as Isaac Asimov suggested: “Any book worth banning is a book worth reading.” In that very vein, and without further ado, here’s my own list of Top 5 Banned Books I’ve Read (And That You Should Read Too).

I will be the first to admit that I wasn’t the biggest fan of Fitzgerald’s magnum opus. Or, at least, not to the extent that others seem to. But I can appreciate a concept when I see one and for that I applaud Fitzgerald’s novel as it perfectly encapsulates the great lure (and lie) that is the American Dream in which you’re told the world is shiny and golden and you can be whoever you want to be, regardless of where you started. I hate this sentiment because it is, as most people accept, absolute bunk – what Gatsby does is help to unpick these themes and show the faultlines in the supposed Roaring Twenties which clash so violently with an otherwise heady age of plenty.

I think this was one of the first contemporary classics I ever read, and it seems fitting for my reading taste nowadays that it was a dystopian in which women of a certain class are subjugated to the point of being concubines or “handmaids” for men of the ruling class. This was my first, and to-date only, Margaret Atwood novel and I think I picked a good one. I can see why this would be banned given merely its brutal sexual scenes, but its supposedly dystopian government control over reproductive function and women’s bodies that makes this novel truly terrifying since it is not too far from contentious issues in modern politics.

3. Lord of the Flies – William Golding

As an assigned book for my GCSEs, you might think that studying Lord of the Flies put me off Golding’s novel – on the contrary, it actually made me like it. I can still to this day recite the point, corroborating evidence, and the explanation of why Simon represents a Christ-like figure within the text. Although it explores what happens when you leave boys to their own devices on an island without adult authority for me one of the most striking aspects of this book is actually the reversion at the end of the narrative – despite all the atrocious depths they have sunk to, they bow with the return of the authority figure and regress into just school boys again. Golding certainly succeeded in illustrating the lengths that human beings, even children, can be pushed to, highlighting the capacity in all of us for good and for evil. 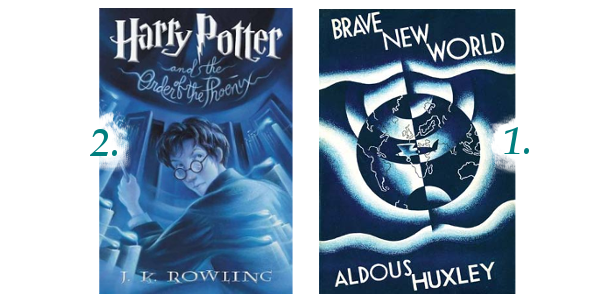 How could I let this banned book topic pass without mentioning the Harry Potter series? I think it would be horribly remiss of me to overlook the series. Growing up with the adventures in Hogwarts I often find it hard to believe people would seek to ban these books from children. Now, however, with a supposedly adult perspective I look back on the books of my youth and find them surprisingly dark and brutal at times, but above all Harry Potter illustrates that growth from childhood naivety to discovering that even one’s heroes are flawed and (heaven forbid) just human after all.

I studied Huxley’s dystopian narrative recently as part of a Posthumanism course that considered the attitudes humans have towards sex, reproduction, knowledge, conditioning and the ways in which technology plays a part in these issues. It’s unsurprising that I enjoyed this novel – from the very title it echoes Shakespeare – but my favourite aspect of BNW is the way in which the totalitarian society is controlled; whilst George Orwell’s 1984 paints the picture of a society controlled by the infliction of pain, Brave New World’s World State ensures control of its citizens through pleasure, something which is the more interesting of the two in my opinion.

So I implore everyone to go read a banned book, talk about banned books, share banned books because, as Laurie Halse Anderson said: “Censorship is the child of fear and the father of ignorance.”