Courtesy of the wonderful Lainey, this week’s Top 5 Wednesday topic is ‘Books You Did Not Finish’. Now, I used to be the sort of reader who diligently stuck with books and soldiered on to the very bitter end, even if I wasn’t enjoying the reading experience one bit. However, lately I’ve realised (and we all come to this epiphany hopefully sooner rather than later) that life is too short to be reading a book you just do not like. As such, my DNF (did not finish) shelf on Goodreads has expanded like so.

Sometimes life gets in the way and I don’t finish a book, sometimes a lack of enjoyment overrules the good reviews the book allegedly has under its belt, sometimes I just am not “feeling it” at that particular moment in time, but either way it gets thrown onto the DNF shelf to potentially be revisited someday. Or maybe not – as is the case with number #5 on the list below. 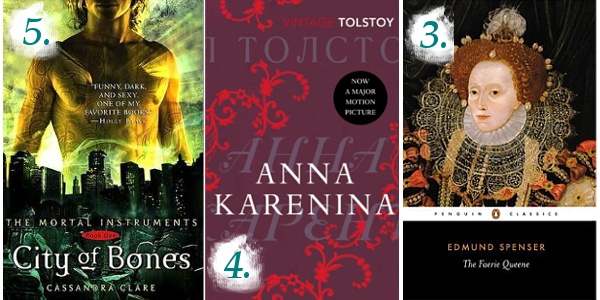 5) City of Bones by Cassandra Clare – I have tried on three separate occasions to get through this book since I wanted to read The Infernal Devices series and I just cannot do it. I’ve drafted a blog post explaining eloquently (or so I hope) why I have so many problems with this book but never worked up the courage to post it. The writing is not especially accomplished, the characters are mostly un-clever mash-ups of every witty character in the fantasy and sci-fi genres (e.g. Buffy the Vampire Slayer), the protagonist is unlikeable, and I just didn’t care about The Mortal Instruments/Shadowhunter world. Sorry, I just do not understand the hype with this series and I won’t ever finish this first book. Believe me, I’ve tried!

4) Anna Karenina by Leo Tolstoy – with this choice I’m not at all disappointed in the book, I’m disappointed in me and seeing this book on my DNF shelf on Goodreads always reminds me of how much I was enjoying this book and then had to put it down to read assigned reading instead. I loved what I read and was very pleasantly surprised by this fact so, unlike with City of Bones, I definitely intend to pick this one up sooner rather than later.

3) The Faerie Queene by Edmund Spenser – again, another shameful confession that I feel the need to apologise for. I’ve taken Renaissance courses, I’ve been assigned this on two separate occasions, and I admit it: I haven’t finished this poem. In my defence, it’s quite an epic, but I do feel like a sham of an early modernist when I admit I haven’t read every word of Spenser’s poem. 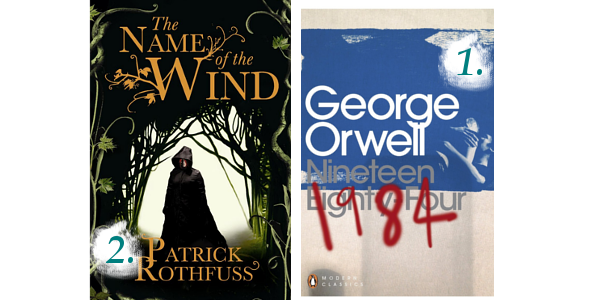 2) The Name of the Wind by Patrick Rothfuss – I don’t know whether it’s me or it’s this book but I just am not getting on with this one lately, and it’s possibly more disappointing than the others in that I’ve heard so many rave reviews of this book on Booktube and yet something is just not working for me. Is it me? Is it the book’s length? Am I not connecting with the characters? Was I just in a bad mood when I tried to read it? Who knows! But I’m hoping to maybe pick this one up sometime in December/January when I hopefully don’t have quite so many books on the go and I can devote my full time and attention to it!

1) 1984 by George Orwell – again, another shameful confession. When people find out I’m quite the reader (or so I self-identify!), they start to ask if I’ve read various modern classics. Confession time: I’m terrible with modern classics, in fact I’m ashamed of how few of them I’ve probably read. 1984 falls into that area too. I once got to just over halfway through before abandoning it for undoubtedly something more cheerful and frivolous. Sorry George Orwell, I’ll finish one of your books one day!

So those were my Top 5 Books I Did Not Finish – anyone else have similar choices for this T5W? Anyone want to try to convince me to pick City of Bones up for a fourth time? Any of these I should absolutely give a second chance right this second? Comment below, let’s talk DNFing books!