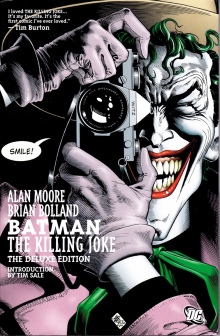 As a person whose only exposure to Batman is centred entirely around Christopher Nolan and Christian Bale’s take on the caped crusader and on the brilliant-but-terrible-really TV series Batman and Robin, I’m not exactly the intended audience for this beautifully illustrated deluxe edition of Alan Moore’s The Killing Joke. Regardless of this rather important fact, I can appreciate both the creepiness of the art style and the ingenuity of the story crafting at work in this comic book.

“All it takes is one bad day to reduce the sanest man alive to lunacy.
That’s how far the world is from where I am. Just one bad day.”

Batman: The Killing Joke takes the relationship between the masked man and his nemesis, The Joker, exploring the motivations behind the latter’s scarily chaotic morality. Centred on the premise that One Bad Day (yes the capital letters are necessary) can alter an individual’s sanity and life thereafter, The Killing Joke seeks to flashback to the Joker’s own past to unpick this foe’s motivation and set up his very own “origin story”, as well as showing him testing out his One Bad Day hypothesis on the unfortunate Commissioner Gordon. What follows is both horrific and horrible, in both story and the imagery used to convey it, but its brutality meshes well with the bold and brash art style of Brian Bolland – the cover alone is enough to give anyone nightmares, including myself when I made the mistake of setting it down face-up beside my bed.

As I previously indicated, I’m not well versed in comic books, and I’m the sort who tends towards the slightly ridiculous tone of Marvel stories rather than the often-darker DC Comics. The only portrayal I’d seen of The Joker prior to this comic was Heath Ledger’s performance in The Dark Knight, a film I found disturbing if only because of the fact The Joker was portrayed as an agent of chaos, a villain that was all the more villainous because of the purely anarchical nature of his actions, such as burning a huge pile of money just to send a message. It’s easy to see where Batman: The Killing Joke fed into Heath Ledger’s portrayal in said film.

“So when you find yourself locked onto an unpleasant train of thought, heading for the places in your past where the screaming is unbearable, remember there’s always madness.
Madness is the emergency exit…”

By filling in the blanks of The Joker’s own origin story (every good hero and villain alike need one, apparently), The Killing Joke puts forward, and tests, the hypothesis than it really is possible to be pushed over the edge into “villainy” (or “insanity” depending on the case) in the space of a single day or one simple action. Commissioner Gordon is used by both Moore and The Joker to test out whether this hypothesis rings true or if, after all, the Joker is just inherently insane and psychopathic – can anyone join him on this level, given the right (or wrong, rather) set of events?

So, as far as the medium goes, it might not be my usual go-to format, but I will say that Batman: The Killing Joke is a comic book for everyone to give a try, regardless of experience or inexperience of the genre. Not being a huge Batman fan, I nevertheless could appreciate the narrative’s questioning of evil, sanity, morality, and cause-and-effect, questions which we often fall to when attempting to craft an understanding of the motivations of every example of “evil” we encounter, fictional or otherwise – and that is what is at the twisting, beating heart of this comic book.

“Memories can be vile, repulsive little brutes. Like children, I suppose.
But can we live without them?
Memories are what our reason is based upon.
If we can’t face them, we deny reason itself!
Although, why not?
We aren’t contractually tied down to rationality!
There is no sanity clause.”

One thought on “Review | Batman: The Killing Joke by Alan Moore and Brian Bolland”