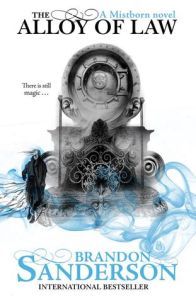 Alloy is a great way to characterise this entire novel – a hybrid of two elements that make this novel not quite high epic medievally fantasy but not quite completely urban or Wild West-inspired steampunk. There are still Allomancers in their mistcloaks in Scadrial but also plenty of talk of trains and horseless carriages too. It’s also a transitional novel in many aspects, technically a standalone story that works to bridge the gap between the first and second Mistborn trilogies. By expanding the existing magic system established throughout the Mistborn trilogy even further through the introduction of Twinborn individuals, those possessing both Feruchemical and Allomantic abilities. All in all, it’s a good way to build and move forward; the evolution of the magic system with the introduction of this new element sets up the metallic arts as evolving and modernising, just as the society apparently has.

“People today…it seems they are good, or sometimes evil, mostly by inertia, not by choice.”

A continuation of Brandon Sanderson’s Mistborn series, The Alloy of Law is a standalone novel that takes place in Scadrial centuries after the events of the first trilogy. In that time Scadrial has changed immeasurably and finds itself on the brink of modernity, with electricity, railways (even plans for an underground railway system, of all preposterous things!), and skyscrapers evolving. The story follows the exploits of lawman Lord Waxillium, of House Ladrian, who is impelled to return to  his house responsibilities in Elendel, forsaking his life in the wilds of The Roughs for an allegedly more civilised life in the high society of the city. Once he arrives in the city of course things aren’t quite as law-abiding as he figured – a mysterious group of bandits known as the Vanishers are causing havoc as they steal railway carriages en route to their destinations. Wax finds himself lured back into the life of a lawman with its detective work and gun-toting despite his position as head of House Ladrian with all its courtly expectations.

Structurally, The Alloy of Law basically consists of a lot of action scenes knitted together by interspersions of witty dialogue, something Brandon Sanderson admittedly does particularly well. For me, there was almost too much action – and too much time, of a relatively short novel, was devoted to detailing each and every move of fights involving Twinborn, Mistborn, Allomancer and so on. It’s a tendency that I noted in the original Mistborn trilogy, but in many ways it was borne of necessity in those establishing books – Sanderson had to devote pages to magical fights in The Final Empire because it was crucial that his readers understood the fundamentals of the use of metals by Allomantic, Feruchemical, or Hemalurgic individuals in combat situations. What with the necessary world-building and the much longer length of those novels, such elongated and descriptive fight scenes didn’t grate on me as much as they did in The Alloy of Law; truthfully I found myself skim-reading most of the combat scenes in this book, as the precise detailing of each and every move made by Wax or Wayne actually slowed down the pace for me, making the fights less dynamic and exciting. However, given the genre of this novel, I can’t say I’m surprised by the amount of action scenes in the novel, I just can’t help but be a little disappointed that this book could have developed some elements so much more than it did – but I suppose Sanderson could well be saving these explorations and reveals for his later novels.

” ‘That hat looks ridiculous.’
‘Fortunately, I can change hats,’ Wayne said, ‘while you, sir, are stuck with that face.’  “

The characters themselves were new to the Mistborn world but there are pleasing references back to the familiar figures of the original trilogy – the city being named Elendel is just one small example. The focaliser in this narrative is Waxillium Ladrian, nicknamed Wax, who felt like the lovechild of not-quite-certain gentleman Elend combined with some of Kelsier’s more rebellious tendencies. Wax became his own character most clearly once he interacted with Wayne, the cool-hat-wearing ruffian to his gentleman. The pair bounce well off one another and their dialogue is comfortably the witty fare Sanderson seems to write so deftly – their banter (for want of a better word) is reminiscent of similar relationships, again, in the original Mistborn trilogy, but the experience was just on the right side of “familiar” that it didn’t become simply the same characters with the same jokes.

For all its relatively small cast of characters, The Alloy of Law pleasingly introduced two female characters who I found to be a breath of fresh air in their own rights. Introduced as Wax’s potential fiancé, Lady Steris Harms is the wealthy woman needed to make an advantageous marriage between their houses and ensure financial security. She’s painted as an oddly matter-of-fact and stern character but I, like Wax, found her upfront manner regarding mistresses and the nuptial contract to be intriguing rather than off-putting – I’m certainly hoping to see more of this character, and more personal development, in the later novels. Likewise, Steris’ cousin Lady Marasi becomes embroiled in the investigations of Wax and Wayne through her studies in the law and her not-so-secret desire to pursue such activities herself. It was plain to see that Marasi and Wax would be thrown together romantically but I was pleased at the moot point Sanderson left their story – there’s something more satisfying, as a reader, to become invested in a relationship-that-cannot-be. Personally I more so enjoyed her interactions with Wax and Wayne, as a three-some unit, as they investigated the true figures behind the mysterious Vanishers group and I hope to see this dynamic return in the subsequent trilogy.

““You are inexperienced. So was I, once. So is every man. The measure of a person is not how much they have lived. . . It’s in how they make us of what life has shown them.”   “

Overall, I enjoyed many of the ideas and concepts which I feel the book gestures towards, undoubtedly setting up the narrative and its tone for the following trilogy of Wax and Wayne books. In particular, the idea of conceptualising Wax and Wayne’s brand of lawmakers as “alloys” – their actions not quite legal and not quite illegal – is a calculated move, gesturing towards questions of morality and criminality that I’m sure will be explored even further in the subsequent novels. Likewise, a pleasing connection is made back to the Allomancers and Feruchemists of the earlier Mistborn trilogy – but such abilities are now used by this hybrid sort of policeman-cum-investigator, a new type of magic user.

The fact that the pair take matters of crime and justice into their own hands, to balance out a noted deficiency in actual law and order in the cities, was my favourite element of the entire novel. All too often, the places you would expect to be more civilised (cities) than the alleged wilds (the Roughs) rarely are, as is pointed out undoubtedly prophetically in the closing moments of this novel:

“You know,” Wayne said,”I always wondered what it would be like to come here, find civilisation and all that. I didn’t realize.”
“Realize what?” Waxillium asked.
“That this was really the rough part of the world,” Wayne said. “That we had it easy, out past the mountains.”

Additional Notes:
As I had success reading Hannah Kent’s Burial Rites to the sounds of Bon Iver’s For Emma, Forever Ago, I’ve taken a similar approach with this book and chosen a soundtrack/playlist to help drown out the train noise, since I read on my journey to work. With this book I expected a more modern fantasy than the Mistborn trilogy, since it jumps ahead 300 years from the previous trilogy, so I planned accordingly and pulled up the Sherlock Holmes film soundtracks (1 and 2), brilliantly composed by Hans Zimmer. In my opinion, his compositions are perfect for any steampunk or urban fantasy books with a bit of action and adventure – I’d especially recommend the Sherlock Holmes film soundtracks, or even his Pirates of the Caribbean ones.

6 thoughts on “Review | The Alloy of Law by Brandon Sanderson”