I like the format of this readathon because it makes it very casual and perfect for indecisive people such as myself. I’ve decided to really restrict my TBR for this readathon because I know from experience that if I set overly ambitious TBRs I never complete them. However Shannon does specify some challenges to help shape your readathon TBRs – and you can definitely double-up on books, an element which speaks to my lazy side! So with those in mind my TBR for #TBRTakedown is: 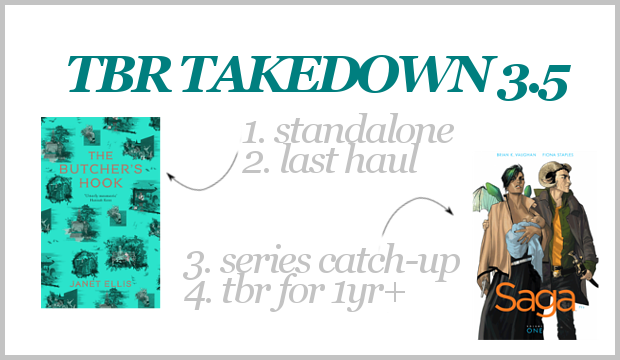 I’ve been on a bit of a library kick at the moment which means I really neglect my own collection but, hey, I’m still reading so as long as that stack of library books gets smaller I suppose that’s still fine. In that vein I recently checked out The Butcher’s Hook by Janet Ellis. This is a début historical fiction novel set in Georgian London and, from what I can gather, it tells the story of Anne who is set to be married off into a loveless marriage when into her life comes the butcher’s boy, Fub, who complicates matters. I assume romance ensues, society isn’t happy, snobbery abound etc. etc. I’ve heard positive reviews of this one so I’m looking forward to reading it.

Second is a graphic novel which I’m sure needs no introduction – Saga Volume 1 by Brian K. Vaughan and Fiona Staples. The first issue of Saga has been on my TBR since late 2014 so this first volume definitely fulfils the challenge criteria, as well as being something I keep meaning to read but always find excuses not to. I’m very hesitant to try this since so many people have raved about it – is anyone else hesitant to try something because so many people like it and there’s a pressure to also like it? Well, I feel that with Saga, which is the only reason I’ve not yet read this epic sci-fi graphic novel series. I have the first two volumes so, hopefully, I’ll be able to read both of them during the readathon and it is technically fulfilling the criteria to catch up with a series since this is definitely the first step in making an effort to catch up to where everyone else is- eagerly awaiting the sixth volume.

So, there we have it – that was my very low commitment TBR for TBR Takedown. Are you participating? If so please do leave your TBRs or TBR posts in the comments below, I’d love to see what everyone else is planning to read.