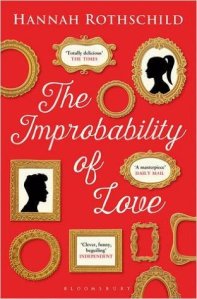 Hannah Rothschild’s Bailey’s Prize shortlisted novel is done a disservice by its generic categorisation and cover (as lovely as they all are) and her story unfolds to be much, much more than a love story in the traditional sense. In fact, the novel’s heroine and protagonist is not the “main” character, unlucky-in-love chef Annie McDee, but, rather, the eponymous painting ‘The Improbability of Love’. A character in its own right, the painting is personified and given an omniscient (and witty) voice by Rothschild so it might speak for itself, quite literally, and tell its own story, a tale which is interspersed with the action of the narrative, as both the painting and the narrative slowly reveal its true provenance.

“Let me guess what you are thinking. Girl finds picture; picture turns out to be worth a fortune. Girl (finally) finds boy with a heart. Girl sells picture, makes millions, marries boy, all live happily ever after. Piss off. Yes, you heard, piss off, as the cake tin at Bernoff’s used to say (it was decorated with Renoir’s Les Parapluies, which explains quite a lot).”

After the impulsive purchase of a painting in a junk shop as a present for a man who never shows up for their dinner arrangement, Annie McDee finds herself unwittingly drawn into the art world of London, complete with its Sheiks, auctioneers, oligarchs in exile, and shady dealers. Whilst working as an unfulfilled chef for a director who doesn’t seem to actually direct any films lately, Annie ends up being seconded as a chef to the Winkleman family, art dealer royalty, and it is here that the plot thickens. Annie finds herself tiptoeing into a world that is a lot more dangerous than she could ever have realized; her junk-shop painting turns out to be a lost Antoine Watteau work, and there are many who would pay even more than a small fortune to possess it.

“love obliterates common sense: look back through history and consider the downright foolishness and acts of moral depravity committed in love’s name. It is destructive and a waste of time. I should know, I have witnessed enough of it.”

I did not know what to expect going into The Improbability of Love, given that it has been marketed as revealing the shadier bits of the art world, and yet also had “chick lit” vibes from some of its marketing and its cover. (Let me be clear – not commercial “chick lit” but “literary” in some way – as though that is “better” and so allowed to be nominated for literary awards. But I digress…) I would not say that this was at all a love story, any indications of romance are well and truly side-lined, and the only relationships that The Improbability of Love focuses on are actually familial – largely, to what extent do family bonds colour the way you view individuals, and can/should they be broken if that individual is self-destructive or morally questionable? It’s a subject that I think everyone can relate to, on some level, and this sense of connection is the true skill in Rothschild’s novel, which otherwise deals with a quite elitist and closed-off clique of the art world and its dealers, its buyers, its criminals. It’s an unsurprising focus given the author’s own art trade background and, yes, she’s one of those Rothschilds.

“Like other successful religions, art has evolved and offers glorious temples and learned high priests as well as covenants and creeds. The new churches are known as museums, in which the contemplation of art has become a kind of prayer and communal activity. The very wealthy can create private chapels stuffed with the unimaginable rarities and guarantee a front seat. It was ever thus.”

From the novel’s opening, readers are introduced to a huge wealth of characters, with the promise of flashing back from this prologue to understand how each of these individuals come to be bidding on the Watteau painting. From Earls-cum-auctioneers, to rappers, to Special guests with a capital S, to art historians, to exiled Russian oligarchs, to aging art collectors – there are a multitude of points of view to explore, varied to say the least, yet they all find themselves connected (sometimes tenuously) in the spider’s web surrounding this one painting that lends its title to the novel itself. Admittedly, at times, there are one too many characters, and if you set the book aside for any length of time, you will find yourself initially confused when you pick it back up (trust me). However, on the other hand, this ensemble-like approach means that there are always a couple of Rothschild’s characters that you’re keen to hear from again, and this keeps a reader reading on to return to their favoured individuals.

“My little theory is that at the heart of all human anxiety is the fear of loneliness. It starts with their expulsion from the womb and ends with a hole in the ground. In between it’s just a desperate struggle to stave off separation anxiety using any kind of gratification – love, sex, shopping, drink, you name it. My composition is about the fleeting, transformative respite over aloneness that love offers despite the cold certainty that this reprieve is only transitory. You will see all these impulses played out again and again with each of my owners.

I think there’s an admirable amount of different personalities, nationalities, professions, and classes in the novel but, even so, the overwhelming number of High Net Worth-ers (to give them a title the auctioneer does) can make the novel seem elitist and very upper-middle-class. To me, that’s where the satire comes in – Rothschild seems at least moderately self-aware enough to present the daily dramas of these rich folk as ridiculous as they are. Whether you believe this satirical tone is, I think, what tips the balance with whether the novel is enjoyable or just plain elitist.

“Who wouldn’t want to own something precious to a great emperor or a king? Who wouldn’t want to be linked to past glory, to monumental power? Most want their taste confirmed and ratified. Art is entirely subjective, so how soothing, how affirming it must be to share the choices of monumental figures from history. Great minds think alike.”

Something must be mentioned regarding the odd turn in tone this novel takes – and I will endeavour to elude to it without entirely spoiling the reveal! Anyone even vaguely familiar with the European art collecting world in the first half of the 20th century will be unsurprised to discover that ‘The Improbability of Love’ ends up passed into some less than savoury hands in the course of its lifetime. The uncovering of exactly how Memling Winkleman came to possess the lost Watteau masterpiece is entwined in his own past – the details of which he vehemently remains silent about – and it is his daughter Rabecca who inadvertently stumbles upon the truth regarding the provenance of her family’s art collection. It is at this point that the tone of the novel shifts, and a reader might begin to allow it the “historical fiction” tag which Goodreads has assigned it. The sudden volta is a little jarring, but necessary in order to bring the novel’s action to a steady crescendo which loops back, and finally makes full sense of, the events of the prologue.

Described as a “savage satire of London life and the art world”, The Improbability of Love is certainly not a heartwarming and optimistic tale from start to finish but, in the end, it is a thoroughly intriguing and entertaining ride through the surprisingly shady world of galleries, museums, and collectors, a ride presided over by the all-seeing and hilarious painting that gives the novel its name.

“My future depends on people believing that I am worth something and need protecting. Art only survives by striking a chord in someone’s heart and offering solace and reassurance. A great picture is the distillation of emotion, offering an empathetic hand across time and circumstance. A wonderful composition inspires sympathy and harmony. No wonder mortals fight to possess us.”

One thought on “Review | The Improbability of Love by Hannah Rothschild”