Welcome one, welcome all, to the inevitable and downright obligatory Best Books of 2016 post that isn’t at all subjective or biased in any way. (Disclaimer: that sentence was entirely a lie.)

I’m sure you’ve seen enough of these lists floating around in the past week or so but, basically, I’ve decided to draw a line under (let’s face it a pretty crappy) 2016 in the most positive way possible – by celebrating some absolutely brilliant books that I’ve read this past year. They may not necessarily have been published in 2016, but all of them were read by yours truly in these past twelve months and, it’s safe to say, if they made this list and have stuck around despite my patchy memory, then they must have been something special. Each of these books has well and truly earned their place on this list and I’ve detailed the not-at-all-incoherent reasoning behind each choice below so that, hopefully, my flailing might persuade you to read them yourself if you haven’t already.

Right, without further ado, let’s do this like the music charts, in reverse order, shall we? 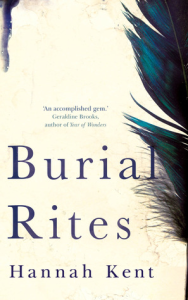 Why?: When people say a story is “haunting”, I finally know what they mean thanks to Hannah Kent’s novel. Set in Iceland, it follows the story of Agnes Magnusdottir, the last person to be sentenced to death in the country. From the outset we are told what Agnes has allegedly done and this characterisation of her as a “murderess” haunts her every word and interaction from this opening page. Add onto that Kent’s chilling writing style which masterfully evokes the harsh, bleak, but beautiful, Icelandic landscape, and you have an absolutely astounding book that has stayed with me for many months.

“To know what a person has done, and to know who a person is, are very different things.”

10. Fates and Furies by Lauren Groff

Why?: When I read this in April I was convinced it would make my Best Of 2016. It’s a testament to how amazing this reading year have been that this wasn’t higher up. Groff’s novel tells the tale of a perfect marriage, first from the husband’s point of view, and then from the wife’s, over the course of their relationship. It really is a game (or novel, rather) of two halves; you only come to appreciate the first once you read the second. Its lasting impression on me was the knowledge that you will never truly know another person, ever – you will never be able to think as they think, or see the world as they see. I have always found this fact of that inherent/inescapable disconnect in shared human experience to be strangely fascinating, and Fates and Furies explored that in a slow-burn that punched me in the gut. 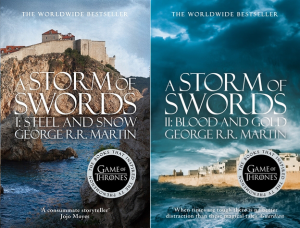 9. A Storm of Swords by George R.R. Martin

Why?: I rather foolishly attempted the #readasoiaf readalong challenge this summer… and failed, but I got further than I’ve ever got before and I’m glad that I did because it meant I finally reached the big, dramatic, game-changing moments that happen in A Storm of Swords and are the things you remember about the TV show (“wedding” is all I will say). I adored the second part of the book and flew through it in record-time. Don’t get me wrong – I still want to skip Bran’s chapters (does anyone actually enjoy them?), but I’m in it for my faves who I know will probably suffer misery and death in the end. It is George R.R. Martin, after all.

“In King’s Landing, there are two sorts of people. The players and the pieces.” 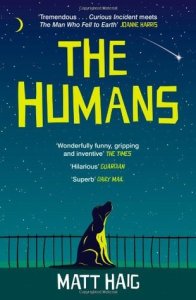 8. The Humans by Matt Haig

Why?: Matt Haig has this extraordinary way of writing in such seemingly simple ways but producing something profoundly beautiful. His Reasons To Stay Alive remains one of the best non-fiction/memoir I’ve ever read and this year I delved into one of his fictional offerings – it quickly proved that he can do both genres without doubt. Seemingly telling the story of an alien who has to pass as human, a professor at Oxford, it unsurprisingly delves deeper into what it means to be human and connect with others of our species, as well as providing some much needed humour in the form of an alien outsider’s perspective of the idiosyncrasies of human life which do seem rather bizarre upon reflection.

7. All The Light We Cannot See by Anthony Doerr

Why?: I had already decided on my Best Of 2016 list and then this book came along and  hit me like a tonne of bricks. Set during the Second World War, it follows two very different paths and stories, that of young German boy Werner and blind French girl Marie-Laure, who finally collide in wartime Saint-Malo because of radio transmissions. It won the Pulitzer for a reason, folks, and people aren’t wrong on this one, trust me/them. Beautiful and devastating seems like an understatement, you have to read it to believe it, but just be prepared for a slow-burner that will leave you bereft and devastated on public transport when you finish it. I’m not saying there were tears in public but… there were definitely tears on the train.

“All your life you wait, and then it finally comes, and are you ready?”

6. The Long Way To A Small Angry Planet by Becky Chambers

Why?: It’s sci-fi, undeniably, but it’s not really about space. Much like Firefly in tone, the story is less about the story of a ship full of people completing a mission (in Firefly, it’s dubious salvaging/smuggling, in Long Way it’s punching holes in space to create black holes) and more about the people. When people talk about being mindful of diversity in fiction, you wouldn’t go too far wrong by trying something like this book as the wealth and depth of the different characters, creeds, and cultures, is very impressively handled – it’s a simple fact of the narrative. But, honestly? It felt like Firefly in book form, so why wouldn’t I adore it?

“Humans’ preoccupation with ‘being happy’ was something he had never been able to figure out. No sapient could sustain happiness all of the time, just as no one could live permanently within anger, or boredom, or grief.”

Why?: It’s a memoir that’s worthwhile and beautiful, without being overly pretentious. Dr Paul Kalanithi was a doctor who, on the cusp of completing his decade-long training as a neurosurgeon, was diagnosed with terminal lung cancer. In that moment he crossed over from being a doctor, in charge of treating patients, to becoming one – and coming to terms with what that meant for him, as a doctor and as a man, when you are suddenly brutally faced with the fact of your own mortality, a mortality he faced every day in his patients but had never felt more acute than it did when facing his own diagnosis. Paul actually studied English literature at university, before moving onto medicine, and I think it’s easy to see this crossing of disciplines in his own writing style which was intelligent, eloquent, and deeply deeply captivating.

“Human knowledge is never contained in one person. It grows from the relationships we create between each other and the world, and still it is never complete.”

4. The Aeronaut’s Windlass by Jim Butcher

Why?: I’m not a huge sci-fi reader, it’s not that I dislike it (I FUCKING LOVE SPACE), it’s just that I haven’t read enough of it to feel comfortable picking up some of the contemporary stuff, what with not knowing some of the forerunners of the genre. But now imagine sci-fi in which there are Houses (with a capital H) of noble families, crystal-powered airships, pirate captains, magic, house rivalries and politics and everything that seems a bit court-intrigue-y and yet it’s part of a sci-fi novel. What you have is this, The Aeronaut’s Windlass, the first novel in what will hopefully be the long The Cinder Spires series. Oh and there are cats – they talk, and (most importantly) they condescend to the humans around them. Yes.

“The worst madmen don’t seem odd at all,” Grimm said. “They appear to be quite calm and rational, in fact. Until the screaming starts.” 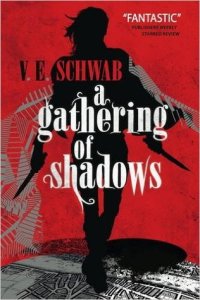 3. A Gathering of Shadows by V.E. Schwab

Why?: Of course it’s V.E. Schwab, so you know the story is going to rip your heart out and make your heart soar within the same book – that’s just a given by this point. Now, I adored the first book in the trilogy, A Darker Shade of Magic, and I wondered how on earth it could be topped… and then Schwab only went and upped the game by including more pirate-y characters (can we talk about Alucard pleaseandthankyou), more roguish flirting (oh yes), a MAGIC TOURNAMENT, and Lila somehow managing to be even more badass (it is possible, apparently). I couldn’t have asked for more and I can’t wait to re-read this in anticipation of the third and final book.

“Kell would say it was impossible. What a useless word, in a world with magic.”

Why?: It’s Buffy meets Jane Austen. No, really. Think secret societies, coming out balls, demon slaying, gentlemen in cravats, suitors of dubious morality and maybe a sordid past, LORD BYRON RANDOMLY BEING NAME-CHECKED, more demon slaying, tea and cake, and a jolly good show… therein you have The Dark Days Club. This book is like Alison Goodman reached into my brain, took two things I love (some good ol’ fashioned fantasy fights and all the ridiculous pomp and circumstance of Regency society), and smashed them together into this book. I loved every second of it… including Carlston, especially Carlston.

“If she had only one word to describe him, Helen decided as she drew closer, it would be commanding. Or enigmatic. Or disturbing. Which, of course, was three words. Lord Carlston was not a man to be contained, even in adjectives.”

Why?: I’m not sure I can fully articulate what is so damn good about this duology without going into all caps, fangirling, and making little to no sense at the end of it all. I tried to do a coherent review of the second book, which also mentions why I enjoyed the first too, for Cuckoo Review so maybe that will articulate my feelings more succinctly than I can here. In less coherent terms though, let me just add, I loved everyone and I wanted to squish all my little criminals of dubious morality together and keep them safe from all the bad things in Ketterdam. What were my favourite parts of the books? Everything involving Nina. Matthias, Matthias my stick-in-the-mud, proper little solider, Matthias. Inej is Queen. KAZ FUCKING BREKKER. Does that cover it?

“Kaz leaned back. “What’s the easiest way to steal a man’s wallet?”
“Knife to the throat?” asked Inej.
“Gun to the back?” said Jesper.
“Poison in his cup?” suggested Nina.
“You’re all horrible,” said Matthias.”

That’s all, folks – that was my Best Books of 2016!
How was your reading year? Do you have a Best Books list yourself?
Link it or comment below, I’d love to hear what your favourite books of 2016 were.