Recently, I had the pleasure of visiting London for a long weekend of musical theatre and sightseeing! I feel extremely fortune to be able to see some many wonderful sights and I’m sure anyone who follows me on Instagram is bored of hearing about this trip but, for posterity’s sake, I thought I would do a quick travel diary on this blog to preserve the memories.

The entire trip was planned way back in January of this year for one very important reason – Liz and I managed to grab Monday night tickets to see Hamilton when it opened in the West End. We were both very excited, but it was January, and the tickets for the show weren’t until December. Even so, we started planning with gusto and decided to make a weekend out of it in the capital city. I’m so glad we did as it turned out to be a wonderful weekend full of sightseeing and musicals.

Luckily, Liverpool to London Euston is a short 2-hour train journey and we managed to nab early tickets which meant we got the train tickets very cheaply too – result! So Saturday morning rolled around, our suitcase was all packed, and thanks to a very kind lift to the station from Liz’s dad we were off on the 10 o’clock train zipping towards London. When we got to Euston plumped for a walk to the Travelodge hotel in Covent Garden since it was about 20-minutes away and it seemed a more appealing prospect than battling the Tube with a suitcase in tow. So, we headed off for Covent Garden. One of the reassuring things about trying to locate a hotel in Covent Garden is that, since it’s a major tourist spot, it’s handily signposted everywhere, and I vaguely remembered that, to get to it, you had to walk through universityland (aka UCL and SOAS) until you started to hit some of the more borderland theatres. Luckily, Motown the musical has opened up in a very gold and shimmery theatre just around the corner from the Travelodge so we definitely knew when we’d arrived in the right place!

After checking in and dumping our bags in our room, we freshened up very quickly then headed off to the first of the two musicals we had tickets for on the Saturday, via a detour at Pret for a quick lunch. Pret is a new obsession that Liz started when we were in the US of all places (she’s an enabler, guys), and it’s continued now we’re back in the UK so I relish any chance to grab one of their chicken, brown rice, and broccoli soups which are just yum! Anyway, after lunch we headed off to Her Majesty’s Theatre, the home of Phantom of the Opera.

We’d previously seen Phantom on Broadway when were in the US in September, but I’d never seen it in its home in the West End and, as it’s Liz’s favourite musical, there was a lot riding on this. I was very conscious of this as we sat down in our seats. I must say something about the seats – you absolutely cannot fault the view you get, considering you pay about £20 for a ticket, but I’d heard horror stories about the restricted legroom saying that, basically, if you’re over 5 foot 5, don’t even try to go for these seats. People exaggerate, folks, it was mild discomfort until I figured out how to sit and lean forward and use the handy safety rail as a ledge for my arms. Sure, you end up with slight cramp in your back if you sit that way for too long (or repeatedly over an entire weekend) but I can’t grumble since the tickets were dirt cheap, for West End theatre tickets! 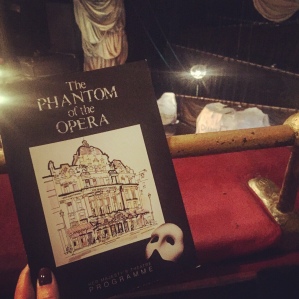 Now onto the most important thing – the show itself! I’m quickly coming around to Phantom. It has much to recommend it – it’s Liz’s favourite musical, it’s my grandma’s favourite musical too, and it shares many similarities with my favourite musical, Les Miserables. It also shares a lot of its talent with it – I swear those two casts are downright incestuous! Ben Lewis was an excellent phantom, just the correct mixture of tortured soul and downright creepy. Raoul as played by the 2nd cover Leo Miles was a revelation. Part of me has always assumed I’d prefer Raoul (I look at the wrong guys in any given film/TV show, it’s an in-joke with my friends), and based on the performance of the West End’s Raoul I enthusiastically concur. He was an extraordinary performer and I found myself actually rooting for Raoul which doesn’t often happen at the end of it all. Likewise, the comedic double act of Monsieur Firmin and Monsieur Andre, the new owners of the Opera Populaire, were wonderful as ever and brought some levity to the show… as light as a show about an opera haunted by a sociopathic “ghost” can be, that is. And ‘Masquerade’ still remains my favourite song, it’s such a crowd-pleaser of a performance, and, with the combined tricks and illusions, it alone is really worth the price of admission. In case it wasn’t clear, in my opinion, Phantom of the Opera at Her Majesty’s Theatre was MUCH better than its counterpart in Broadway so if you ever get the chance to grab a ticket, do it!

After filtering out of the theatre, we wandered through Leicester Square and saw its Christmas Market from the periphery – we stopped long enough to snap a pretty photo but swiftly moved on because I always feel like Leicester Square is a good place to get pick-pocketed. We grabbed a quick beer and a burrito (bowl for me) from Chipotle because, once again, Liz started an obsession when we went to the US, and also because we knew any sit-down restaurants in the vicinity would be packed as it was deep in the heart of theatreland and a Saturday evening too. There were many revellers spilling out pubs and chanting along the streets dressed in Santa suits so I think it’s safe to say we made a wise decision to just stick with what we knew would give us fresh food, cooked well, and quickly. After finishing up our beers we went straight to Queen’s Theatre for my favourite musical, Les Misérables.

As with Phantom, we grabbed cheaper tickets in the slip seats that boasted a “restricted view” and “restricted legroom” but I would actually advise people go for these tickets, if you can put up with mild discomfort to your knees because you’re so close to the action you’re almost on top of people at certain points. (Plus it gives you a nice eye-line from which to peep into the orchestra pit and the super enthusiastic conductor, Les Mis ALWAYS seems to have conductors who give it beans, it’s so cute.) 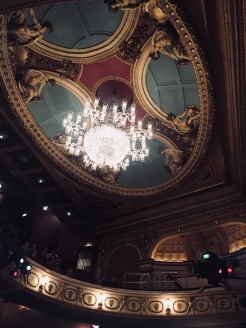 Now, I will always carry a torch for the first time I saw Les Mis at the Queen’s because it starred what (for me) was the dream team of Anton Zetterholm as Enjolras, Carrie Hope Fletcher as Eponine, and Rob Houchen as Marius. I couldn’t tell you who was Jean Valjean when I first saw it because, frankly, I didn’t find his performance compelling enough to remember – harsh, but fair, in my (very subjective) opinion.

This time was a whole different kettle of fish, largely because the current Valjean is played masterfully by Killian Donnelly. Donnelly is someone I’ve never managed to catch in Les Mis despite the fact he seems to have pretty much played everyone at this point so it’s, frankly, a miracle I’ve never seen him in anything but the film version and the 25th anniversary concert. However, I’m SO glad I managed to see him as Valjean because he made me actually focus on that character for once and he was insanely good. He played well that difficult balance of gratefulness and frustrated anger at the Bishop’s gift (a crucial moment that the entire musical hinges on) which mirrors the confused and frustrated undoing of Hayden Tee’s Javert towards the very end of the musical. For me, if your Valjean and Javert don’t compliment and contrast each other perfectly, then the musical falls apart, and this production in particular has an extraordinary Valjean and Javert in Donnelly and Tee. For once, I wasn’t just all about Les Amis de l’ABC which (believe me) is one of the highest compliments I could give a production of Les Mis… though Paul Wilkins’ Marius was a predictable squish and I did dutifully cry during Empty Chairs At Empty Tables and Bring Him Home, my reaction to these songs is the general watermark by which I usually measure whether or not a production is touching enough. Yep, definitely was, I sobbed.

Unsurprisingly, after a total of about 5 hours of musical theatre on Saturday (and the standard slight emotional breakdown for me during Les Mis), all we could do after we came out of Queen’s was wander back to the hotel and have a bedtime cup of tea… because we’re stereotypes like that. Plus we needed to conserve our energy ready for Sunday and what was (or should have been) the Harry Potter Studio Tour which (spoiler alert) did not go as planned…

Don’t say I don’t know how to do suspense, guys… stay tuned!