Welcome one, welcome all, to a new feature to this blog which I have decided to call: Weekend Watching. This will be a hopefully regular post uploaded on Saturdays or Sundays (hence the “weekend watching”) where I talk about a film, TV show, or maybe even YouTube channel/video that I’ve particularly enjoyed recently. I’m hoping to spotlight at least one thing to watch each week and hopefully someone at least will get a kick out of these posts – I will, if no one else does!

Last week’s inaugural Weekend Watching showcased The Good Place and this week I’ve decided to stick a little closer to home by highlighting one of my new favourite British sitcoms, Lovesick.

Originally broadcast as the horrifically-named Scrotal Recall, Lovesick is a British sitcom first broadcast on Channel 4 in the UK and now commissioned by, and available via, Netflix worldwide. Starring Johnny Flynn, Antonia Thomas, Daniel Ings, and Joshua McGuire, it focuses on a group of twenty-something friends living in Glasgow, Scotland, and the trials and tribulations of their various love lives. The show opens on Dylan (played by Johnny Flynn) discovering that he has contracted chlamydia and so has to contact his previous sexual partners to let them know they may have it too. From what sounds like a rather bleak premise emerges a hilarious (and often unexpectedly emotional) TV show, with each episode focusing on (and named after) a previous sexual partner of Dylan. The episodes are, in effect, flashbacks to months or even years before, and the non-linear structure of these episodes disjointedly builds up a picture of each character’s past and present, and perhaps their “growing up” along the way. 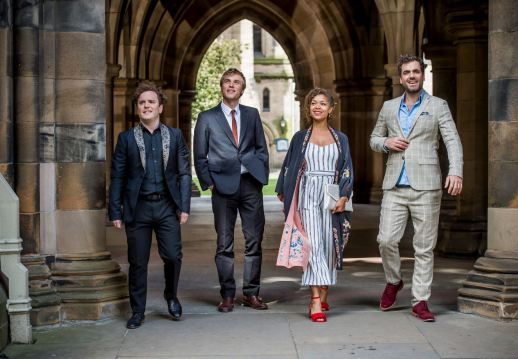 The small main cast is led by Dylan as played by musician Johnny Flynn, a slightly awkward and emotionally inept romantic at heart who flits from one girl to another in the hope of finding that “something more” in these casual relationships. His best friends and flatmates come in the form of Luke, played spectacularly by Daniel Ings, and Evelyn, portrayed by Antonia Thomas. The former is irresponsible and shallow, the latter is sarcastic and carrying a torch for a certain someone. Rounding off the group is Joshua McGuire’s Angus, a childish friend (but on paper the most mature – episode one features his wedding) from their university days.

If I’m honest, the protagonist Dylan and his seemingly unrequited pining over Evie (and vice versa) isn’t why I continue to watch this show, although it is heart-wrenching, rather it’s for the supporting characters and relationships that I keep coming back to this time and time again. The core four characters are also joined by brilliant guest stars, my favourite of whom so far has been Susannah Fielding’s Phoebe, Dylan’s date to the Pub Quiz Night who is basically a female version of Luke. Probably quite predictably, however, Daniel Ings’ Luke is a stereotype of the absolutely shallow dickhead that actually turns out to have some redeemable features and, perhaps, a heart of gold underneath all his bullshit. My favourite relationship in the entire show happens to be a non-romantic one – the friendship between Dylan and Luke, largely because they seem to be such a strangely matched pair that their entire relationship is extremely endearing and provides much of the comic relief as well as the genuinely touching moments whilst they both try to navigate the highs and lows of loving and losing the people they care most about.

If you like other British sitcoms such as Fresh Meat and Skins, you’ll likely find Lovesick right up your street, but be prepared for some unexpectedly sad moments amongst all the amusement.

Links:
Trailer for Lovesick
Lovesick on IMDB
Why I love… the TV show Lovesick
Lovesick season 3: Britain’s most charming sitcom is back on Netflix
3 reasons to watch Netflix’s Lovesick
The romcom isn’t dead: It’s just become less recognisable
19 Times “Lovesick” Made You Piss Yourself, And 11 Times It Broke Your Useless Heart (#28 tho)