If you are at all a frequenter of my Instagram, you will find many a picture of breakfast food. The reason for this is twofold: 1) I really love breakfast food, give me pastries and bagels and toast ALL DAY, and 2) I spent a lot of time eating breakfast at The Tavern Company in Liverpool.

Anyone who has been to the Tavern will understand this and I have to say I’m very glad I didn’t go to university in Liverpool because a lot of my student loan would have been “wasted” on said breakfast food. Except when it comes to their food, I don’t really think “waste” is the appropriate verb because oh my god it’s worth every damn penny and every damn calorie.

Is this just really a not-at-all-veiled love letter to one of my favourite eateries? Yes. So buckle in whilst I gush about it.

Located on Smithdown Road, The Tavern Company is a Mexican BBQ-based restaurant and bar with a relaxed feel, some extremely cool decor, and a killer breakfast menu. The fact that there are frequently queues outside it on many a weekend morning pretty much attests to its popularity, and the fact that people know it’s standard to wait for a table for breakfast (and are willing to do it time and time again) says that it’s well worth it.

In the year or so since moving to Liverpool, I’ve had the pleasure of sampling their brunch and dinner menus. When it comes to dinner, the casual atmosphere makes for a relaxed feel, and the candles help to add an intimate feel, if that floats your boat. As for the food, the Ultimate Nachos, Cajun Blackened Chicken, and Apple Crumble are all to die for… especially the nachos, be prepared to happily bust the button off your jeans! They’re not shy with their portion size, they really do feed you! Don’t believe me? Take a look at the photographic evidence:

However, to me, the brunch menu is really where it’s at since I will gladly get up early on a weekend morning in order to beat the 10am rush/queue. And, clearly, other people agree it’s well worth it too! The Tavern boasts The Nation’s Best Breakfast 2014 and 2015, Liverpool’s Most Family Friendly Restaurant 2014-2016, and Trip Advisor’s Certificate of Excellence – what more (critical acclaim) could you want?

But does their brunch menu really live up to the hype? My friends, my friends, observe the evidence: 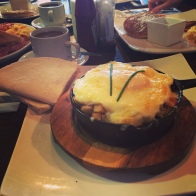 The inside of the Tavern

From the Award-winning “Full English” to the state-side equivalent in “The American”, its “NY Deli Smoked Salmon Bagel” and “Huevos Rancheros”, and its back by popular demand chocolate churros**, every plate that will be set down before you at The Tavern will be met with an exclamation of “oh god” because a) that’s a lot of food (they do not scrimp on portion size) and b) you know that, even though it’s a big plate of food, you’re going to try your hardest to eat every single bite because it looks, smells, and tastes so good. I’ve never once left the Tavern unsatisfied, or able to think about eating another mouthful of food anytime soon (seriously, they’re feeders).

**Over a space of several months after they disappeared from the menu, Liz and I demanded (politely) they bring back the chocolate churros on every single comment card we filled it. We claim it as a personal victory that we helped to bring them back. We’ve started our campaign to get the lemon curd and raspberry pancakes back too! 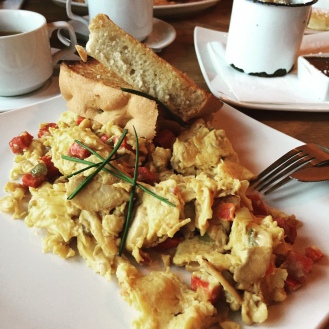 The chorizo scrambler, served with focaccia

The stack of pancakes drizzled with syrup 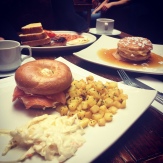 Also did I mention they do free bottomless tea and coffee? And it’s pretty damn good coffee too. Their wait staff understand the dire need for coffee and are extremely attentive at realising your coffee cup is empty and needs filling, stat!

So, if I haven’t convinced you of my undying love for The Tavern yet, maybe the photographs will have persuaded you that the food is super yummy and you should definitely visit it if you get the chance. When friends from university have came to visit me and Liz in Liverpool, one of the highest things on the agenda of places to take them has been for breakfast at the Tavern. When we came back from our DC and NYC trip last year, one of the first things we did the next morning was go to the Tavern for food. Whenever the working week is proving to be a bit of a drag, we plan to go to the Tavern on the Sunday morning. And I don’t think that is going to change anytime soon…