Review | How Not to Be a Boy by Robert Webb 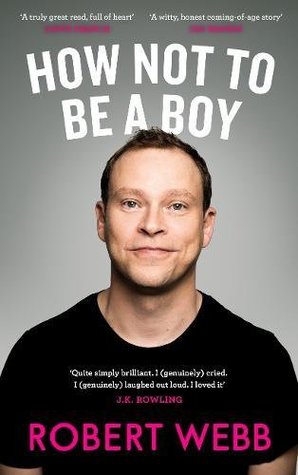 “RULES FOR BEING A MAN: Don’t Cry; Love Sport; Play Rough; Drink Beer; Don’t Talk About Feelings. But Robert Webb has been wondering for some time now: are those rules actually any use? To anyone? Looking back over his life, from schoolboy crushes (on girls and boys) to discovering the power of making people laugh (in the Cambridge Footlights with David Mitchell), and from losing his beloved mother to becoming a husband and father, Robert Webb considers the absurd expectations boys and men have thrust upon them at every stage of life. Hilarious and heartbreaking, How Not To Be a Boy explores the relationships that made Robert who he is as a man, the lessons we learn as sons and daughters, and the understanding that sometimes you aren’t the Luke Skywalker of your life – you’re actually Darth Vader.” (Synopsis from the publisher)

I’m going to open this review with a confession: I’m not a huge fan of Robert Webb. That sounds a little like the opening to a terrible review but hear me out, I’m not a fan of Robert Webb – I’m mostly indifferent to his work, erring on the side of ‘yeah, he’s alright’. I like some of his comedy writing and I’ve seen the odd episode here and there of Peep Show, but I wouldn’t ever describe myself as a “fan” of his. Despite (and maybe even because of) this, I ended up enjoying How Not to Be a Boy a lot more than I expected, and I’m glad that I did. The audiobook medium is definitely the best way to experience these self-narrated, coming-of-age, non-fiction/memoir style books, so if you can get hold of How Not to Be a Boy on audio, I would definitely recommend it.

Ostensibly, this book tells the story of Robert Webb’s childhood, growing up, university, and right through to present day, chronicling the many (misguided) ways he was told to “be a boy” or “not be a boy”, as well as plenty of material about his education, his early comedy days, his time in the Cambridge Footlights, and his collaboration with David Mitchell. I’ll admit that I had a tiny bit of hesitance going into this book because I was worried than, in a market full of memoirs and non-fiction titles about contemporary women’s experience of gender and sexuality, I worried this would be the “man’s answer” to such memoirs. I couldn’t have been more wrong; instead this book (without any hint of superiority) highlights the ways in which we are letting men and women alike down by placing such restrictive gendered expectations on people from birth.

“[Women] haven’t been encouraged since childhood to wear a total lack of self-awareness as a badge of pride [as men do]. On the contrary, the message they’ve been getting is that they are ‘intuitive’. They are ‘nurturers’ and ‘good listeners’. They’re there to intuitively tell men to go to the doctor and to nurturingly sort out the laundry. Luckily, they can also ‘multi-task’, so they can do both at the same time, as well as booking their kids’ dental appointments and making a lasagne. Sadly, men can’t ‘multi-task’ apparently, which must be the reason we tend to take a step back from all that.”

As Webb highlights through non-preachy and funny (though at times bittersweet) recollections, by compounding ideas of “what it means to be a man” to boys and girls, we are not only limiting entire generations of boys into a rather narrow view of masculinity that is largely toxic and harmful to their own mental well-being; we are also allowing a generation of boys to grow up and father children who either perpetuate this learned behaviour (in the case of boys), or “learn” that this idea of man is “how men are” (in the case of girls). This does disservice to both genders and it is a cycle which it is hard to break out of, especially if we don’t realise we are participating in it. As Robert Webb admits, he was concentrating so hard on not being like his father as he matured that he actually ended up, inadvertently, becoming exactly the sort of model of man that his father was, and perpetuating his model of emotionally stunted “fatherhood” too, relying on the woman/mother in the relationship to do all the emotionally heavy-lifting in the relationship and with the children. As Webb later realised, the world of men couldn’t be magically made better for his own daughters, but what he could affect was his own behaviour, and so he shifted his focus onto being a better “man” so that this was the idea of “man” his daughters will carry forward into their own adulthood.

“The great thing about refusing to feel feelings is that, once you’ve denied them, you don’t have to take responsibility for them. Your feelings will be someone else’s problem – your mother’s problem, your girlfriend’s problem, your wife’s problem. If it has to come out at all, let it come out as anger. You’re allowed to be angry. It’s boyish and man-like to be angry.”

Aside from the discussions of gender expectations which limit men and woman alike, I didn’t quite expect the intimate details of Robert’s own life to be shared with quite so much candour. This is part memoir, so obviously his own coming-of-age experiences deeply inform the meat of this book, but it is very honest with also sharing the experiences of other men in his life – namely his grandfather and his father. For example, he recalls that his grandfather, basically on his deathbed, said “well… at least we had good holidays”, as though repentant and apologising for any deficiencies there might have been in his own behaviour by pointing out that at least they’d had good family holidays together. I’m not sure why, but that one really hit me. It’s probably because most of the men in my family are of this ilk; it’s partly a generational thing, I think, but reading this book and hearing Robert Webb’s personal experience of such crushing conventions of masculinity has certainly made me remember how utterly damaging these standards are, not only to men, but to women too.

“It’s everywhere: a system of thought and a set of invented and discriminatory practices in our laws, culture and economy that feminists call the patriarchy. Feminists are not out to get us. They’re out to get the patriarchy. They don’t hate men, they hate The Man. They’re our mates. The patriarchy was created for the convenience of men, but it comes at a heavy cost to ourselves and to everyone else.”

I would highly recommend this book, even if you’re only a so-so consumer of Robert Webb’s comedy, as it proves to be pretty honest look at his time at Cambridge as he tried to shape an identity there, amidst his own confusing grapple with his sexuality, and its sections on his time in the Footlights, and the early days of comedy writing with David Mitchell, are also particularly amusing and eye-opening. (This might have been specifically interesting to me as I’m quietly intrigued by the entire Cambridge Footlights scene!) Perhaps more importantly, How Not to Be a Boy is a non-fiction/memoir that, amidst the absurdity and hilarity, also actually has something earnest and constructive to say about how we raise boys and girls, and, maybe, how we can do better for all genders in the future.