Hello one, hello all. Today I bring you a somewhat belated but nonetheless exciting post – an unboxing! And not just any old unboxing but an unboxing of February’s Fairyloot box focused on the theme ‘Twisted Tales’.

For those who don’t know, Fairyloot is a UK-based subscription box with a monthly theme which the products of center around. Boxes contain a new YA fantasy release and 4-6 bookish goodies and each box is so beautifully packed you won’t want to ruin the prettiness by unwrapping it! Boxes frequently feature signed bookplate and a letter from the author, as well the beautifully designed Fairyscoop newsletter – even the packing list containing details of all the products is carefully designed and curated.

I’ve received four boxes so far (and have one on the way) and I’m constantly amazed by the care and passion which seems to go into every item in every box. Everything is so carefully selected that it feels like every single small item that is included is there for a reason and there are so many products and editions exclusive to Fairyloot that the box has very quickly became one of my favourite bookish things.

After skipping out on the January ‘Talk Faerie To Me’ box (since I’m not a fan of the whole fae thing and I dislike Sarah J. Maas related items), I eagerly jumped back on the Fairyloot bandwagon once the February theme of ‘Twisted Tales’ was announced. I love a good fairytale, especially if its dark and creepy as originally intended, so I had to have it when I heard this in Fairyloot’s announcement: “Once upon a time… there was a box filled with exclusive items themed around dark fairy tales and an epic and exclusive signed book! To find out how this tale ends you’ll have to wait until February 2018. The February ‘Twisted Tales’ box is perfect for fans of dark fairytales and The Grimm Fairytales! You can expect items themed on Little Red Riding Hood, Snow White, Hansel and Gretel, and Rapunzel. The book we are featuring is a very highly anticipated new release that has magic, dark fairytales, and mystery. It’s a completely mesmerising read that you are sure to love! What’s more, the edition we will include is an exclusive hardcover edition made just for FairyLoot that you won’t be able to get anywhere else (it’s stunning!) and it will also be signed by the author – that’s right, it’s actually signed!”

Now we know what kind of goodies to expect inside, let’s not waste any more time, let’s take a peek at all the bookish goodness I found inside:

Look at all these goodies! As always, the theme of the box is centred around the new release which they feature in each box – this month’s theme was ‘Twisted Tales’ because its book was the highly-anticipated YA fantasy The Hazel Wood by Melissa Albert in this rather stunning hardback edition. The rest of the items all coordinate with this twisted fairytale idea too so let’s take a closer look, shall we?

First up we have the spoiler card, author letter, themed bookmark, and Fairyscoop (Fairyloot’s monthly newsletter). All of these are always meticulously illustrated and designed and I’m definitely building up quite the collection of the bookmarks. But this month’s box also had a bonus bookmark, an Exclusive ‘Little Red Riding Hood’ woodmark from Ink and Wonder. It is beautiful and features the quote ‘wolves may lurk in every guise’ which is very, very true, especially in fairy tales!

Also included was an amazing mug. I have waaaay too many mugs already, seriously, it’s a problem, but I don’t mind adding yet another one to the collection since it is so pretty. This is another Fairyloot Exclusive ‘Grimm Tales’ mug designed by AunjuliArt. The design includes a lot of little nods to different Brothers Grimm fairytales – fun!

There’s also an exciting-looking candle, the Exclusive ‘Hinterland’ candle from Wick and Fable. It’s allegedly a bit of a woody smell and also has hints of tea leaves – I haven’t had the courage to start burning it yet so I’ll have to take their word for it until I do! The author of this month’s book, Melissa Albert, also apparently helped to devise the smell of the candle which is a really cute idea and I love that, I hope they continue to do things like that where possible because it’s a really nice touch that helps to tie everything together even more! 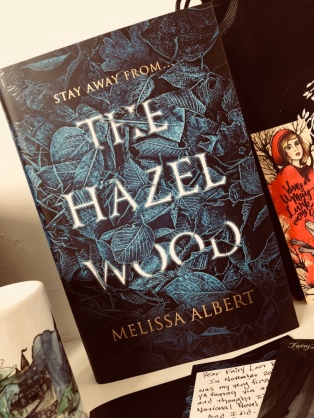 Next up we have Exclusive ‘Poison Apple’ bath salts from Little Heart which I love the idea of and the little nod to Snow White but, unfortunately, I can’t use them. As someone with ridiculously sensitive skin, the slightest thing can make it flare up so I don’t tend to deviate from the shower and bath products I know won’t make me have a reaction. (And even then they sometimes do!) It’s such a shame because this is such a fun idea for a product to include but unfortunately this pack of bath salts is going to have to sit with the Loki-inspired body lotion I got in my first Fairyloot box as such a cool idea but something I should pass onto someone who can actually use it!

Moving on, we have a product I can definitely use – socks! I do love a good pair of socks and these ones are no exception, they’re Exclusive ‘The Witch and the Ginger Bread House’ socks from Fairyloot themselves! Clearly they’re a reference to Hansel and Gretel and it’s such a simplistic but effective design so I’m sure these will be added to my extensive sock collection.

Last but certainly not least we have the book that’s the reason for this all – The Hazel Wood by Melissa Albert. On a deeply shallow level, the cover on this hardback is stunning and so dark and foreboding with the leaves encroaching on the text of the title and trapping them – spooky! As the publisher’s website says: “Seventeen-year-old Alice and her mother have spent most of Alice’s life on the road, always a step ahead of the strange bad luck biting at their heels. But when Alice’s grandmother, the reclusive author of a book of pitch-dark fairy tales, dies alone on her estate – the Hazel Wood – Alice learns how bad her luck can really get. Her mother is stolen away – by a figure who claims to come from the cruel supernatural world where her grandmother’s stories are set. Alice’s only lead is the message her mother left behind: STAY AWAY FROM THE HAZEL WOOD. To retrieve her mother, Alice must venture first to the Hazel Wood, then into the world where her grandmother’s tales began…” Doesn’t that just sound so creepy and brilliant? I can’t wait to dive into it and see for myself!

As you can see, Fairyloot once again do not disappoint! If you’re interested in the items I unboxed here, or a fan of YA fantasy, or just intrigued by the idea of this subscription box, then I’d definitely recommend you keep an eye out for the theme of next month’s Fairyloot box on their website and Twitter – the team behind Fairyloot are so enthusiastic and passionate about their product and super friendly on social media that I definitely do not hesitate to recommend their boxes in this unboxing post!