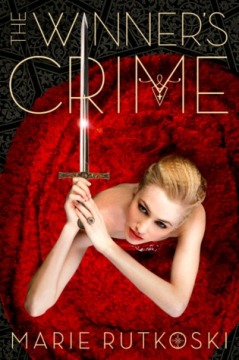 “Lady Kestrel’s engagement to Valoria’s crown prince calls for great celebration: balls and performances, fireworks and revelry. But to Kestrel it means a cage of her own making. Embedded in the imperial court as a spy, she lives and breathes deceit and cannot confide in the one person she really longs to trust… While Arin fights to keep his country’s freedom from the hands of his enemy, he suspects that Kestrel knows more than she shows. As Kestrel comes closer to uncovering a shocking secret, it might not be a dagger in the dark that cuts him open, but the truth. Lies will come undone, and Kestrel and Arin learn just how much their crimes will cost them in this second book in the breathtaking Winner’s trilogy.” (Synopsis from the publisher)

The second instalment in Marie Rutkoski’s The Winner’s Trilogy, the aptly titled The Winner’s Crime deals with the aftermath of Kestrel’s decision to become engaged to the son of the Valorian emperor in order to end the Herrani rebellion and ensure Herran’s safety as an independent territory under Arin’s governorship, her ambassadorship, and (ultimately still) the Emperor’s control. Although Kestrel, Arin, and Kestrel’s father General Trajan, are still very much the same characters we were introduced to in The Winner’s Curse, both them (and the newly introduced characters of the Valorian Emperor, his son Verex, and the agricultural minister Tensen) grow exponentially as characters as they become entangled in a much more complex and dangerous game of court politics. Although there seems to be less potential for bloodshed, the intense scrutiny Kestrel is put under at court results in her walking a very thin line as she tries to affect change whilst also remaining true to her heart’s loyalties. It becomes a very dangerous game to play with much higher stakes and very real consequences.

“‘Sometimes you think you want something,’ Arin told him, ‘when in reality you need to let it go.’”

Everything in this book just seemed more – there was more spying, more difficult familial dynamics (with Kestrel and her father and the Emperor and his son Verex), more romantic tension (there’s a ~scene~ in an alcove and, believe me, once you’ve read it, you’ll know the one I’m referring to), more violence and mutilation, more deception, and more sustained and clever exploration of what it means to be “enslaved” by a person or by a system, both literally and figuratively. Previously established loyalties really are put under pressure in The Winner’s Crime and it makes for a very unsteady and unsettling reading experience because there really is absolutely no guarantee that any of your favourite characters will come out of this whole business unscathed.

It was also a timely opportunity for Rutkoski to world build out from the Herran peninsula and show her readers the wide world in the empire. I love a good old court setting with a nice dose of a slightly despotic ruler and some spying and intrigue to go along with it so that you never quite know where peoples’ loyalties truly lie. To see Kestrel navigate the much more contained (and containing) environment of the Emperor’s court may seem like she was in a less perilous position than at points during the previous book but, in fact, it proved to be anything but less dangerous. Likewise, Arin ventured not only to the court as Herran’s governor, established now in that role in this sequel, but also to other locations only previously mentioned, namely Dacra. By doing so Rutkoski is able to build a much more rich world than she previously had the scope to do so, and I very much enjoyed the different cultures and societies that she has begun to explore.

In conclusion, this book made my heart hurt, a lot. It’s incredibly frustrating (in the best way) when you see characters misunderstand each other and miscommunicate, and I know that, for some people, the device of miscommunication can become tired very quickly, but I ate it up and gladly. My heart hurt, it was wrenched from my chest and stomped on my Marie Rutkoski, and I loved that about this book. Everything I thought I knew about the lengths characters would go to was proven wrong, and I felt that the world, the characters, and the narrative grew in this very accomplished second book – I am both very excited and incredibly nervous to read the concluding part of the trilogy and see what Rutkoski has in store for Kestrel and Arin.

“If you won’t be my friend, you’ll regret being my enemy.”

2 responses to “Review | The Winner’s Crime by Marie Rutkoski”