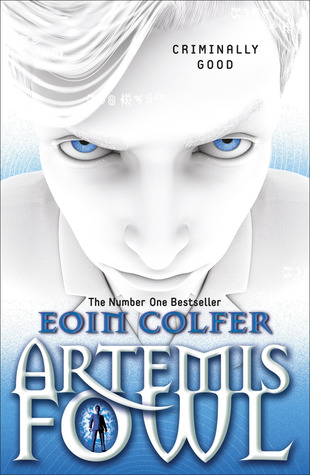 “Twelve-year-old villain, Artemis Fowl, is the most ingenious criminal mastermind in history. His bold and daring plan is to hold a leprechaun to ransom. But he’s taking on more than he bargained for when he kidnaps Captain Holly Short of the LEPrecon (Lower Elements Police Reconnaissance Unit). For a start, leprechaun technology is more advanced than our own. Add to that the fact that Holly is a true heroine and that her senior officer Commander Root will stop at nothing to get her back and you’ve got the mother of all sieges brewing!” (Synopsis from the publisher)

“Artemis Fowl had devised a plan to restore his family’s fortune. A plan that could topple civilizations and plunge the planet into a cross-species war. He was twelve years old at the time…”

I distinctly remember purchasing the very shiny, almost mesmerising hardback edition of the fifth book in the series, Artemis Fowl: The Lost Colony, so I can mark my last outing with the Artemis Fowl series as taking place around 2006. I would have been 13/14 years’ old and in that pivotal stage in your life when your personal tastes are really cemented, the age at which my reading focused on the likes of Garth Nix’s Old Kingdom trilogy, Anthony Horowitz’s Alex Rider series, Mary Hoffman’s Stravaganza series, Malorie Blackman’s Noughts and Crosses series, J.K. Rowling’s Harry Potter series (of course), and, in turns out, Eoin Colfer’s Artemis Fowl series. I remembered enjoying Artemis Fowl but it is only on re-read that I truly appreciate and recall how much I must have enjoyed these books.

“The trick to negotiation was to hold all the cards going in and, even if you didn’t, to try to look as though you did.”

The main narrative of this book focuses on the adolescent genius Artemis Fowl II, son of once-powerful crime lord Artemis Fowl senior (who has been missing, presumed dead, for the two years prior to the start of the narrative), and the boy’s efforts to track down and kidnap a fairy, holding them for ransom for their fairy gold, in the hope of restoring his family’s fortune and “good” name. Along on the adventure with him is Butler, his stocky (and frankly terrifyingly well-trained) bodyguard and Juliet, Butler’s younger sister who acts as a nurse of sorts to Artemis’ bed-bound, schizophrenic and delusional mother Angeline (the depiction of whose mental illness and bipolar disorder is, actually, quite saddening and realistic amongst the otherwise fantastical elements of the story line). Having painstakingly researched and tracked down various elements, and reports, of fairy lore, Artemis is then sure he can trick a fairy into a well-laid trap and follow through his plan without a hitch. However, these fairies aren’t the cheerful sort often depicted as “fair folk”; they’re cankerous, badass, and dangerous in equal measure, especially when you poke them with a stick or, indeed, kidnap and hold to ransom one of their own.

“I don’t know why it is, Captain Short, but whenever you start agreeing with me, I get decidedly nervous.”

Heading up the fairy gang is Julius Root, the no-nonsense, cigar-chomping commander in charge of the elite branch of the Lower Elements Police force, known as LEPRecon(naissance)  – yes, pronounced “leprechaun”, us humans have mistakenly referred to these fairies as such for centuries. Also in his team are Foaly, the tech-savvy, paranoid centaur who is so sure that the CIA and FBI are spying on them, and Captain Holly Short, something of an experiment for the LEP as she was their first female officer, and feels the pressure of that holding her to much higher standards than her male counterparts every single day in the field. When Holly is captured and held for ransom by Artemis Fowl, it’s up to Root and his team to rescue one of their own, a mission during which Root begrudgingly recruits Mulch Diggums, a criminal, tunnelling dwarf with penchant for pick-pocketing, even doing so to his arresting officer whilst he’s waiting to be processed at the police station. If they fail to rescue Holly it will not only look extremely embarrassing for Recon, it will also endanger the safety and security of the entirety of their people who rely on the secrecy of their race from the Mud People aka humans to ensure their survival.

“Let us proceed under the assumption that the fairy folk do exist, and that I am not a gibbering moron.”

Reading like part spy-thriller and part fantasy novel, Artemis Fowl displays that wonderful ability of children’s fantasy to work as a story with both its child and adult readers. For any naysayers who find the fact Artemis that is a child genius and talks like a middle-aged man completely unrealistic, I would kindly point out that you’re happily buying into a story where fairies live within the Earth’s core, ride magma flumes to the surface, and dwarves unhinge their jaw to tunnel through earth and excrete it as shit. And that’s not even including the time loop situation that occurs within this story. And yet Artemis is the unrealistic element to this whole set-up? As you can probably tell, I have issues with that held up as a criticism of the Artemis Fowl series.

“And if history had taught any lessons it was that humans couldn’t get along with anyone, even themselves.”

If there’s one thing this re-read has proven it’s that the fact I consumed Artemis Fowl in my adolescence explains a hell of a lot about my reading taste now as an adult. In fact, it explains a lot about my taste in books, films/TV shows, characters (specifically antagonists and villains), and men – I wish it weren’t so, but that particular kind of well-spoken, eloquent, intelligent, borderline smart-arsed manner of Artemis Fowl has wormed its way into my subconscious as an ‘attractive’ quality. But, in a larger sense, the humour contained within Artemis Fowl was truly wasted on my pre-teen self; it’s for this reason that I’m thoroughly glad I’ve chosen to re-read the series starting with this, the brilliant inaugural adventure of Artemis Fowl and his dealings with the Lower Elements Police force.