Review | The Power by Naomi Alderman 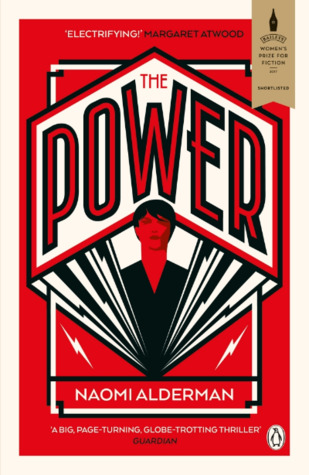 “All over the world women are discovering they have the power.
With a flick of the fingers they can inflict terrible pain – even death.
Suddenly, every man on the planet finds they’ve lost control.

The Day of the Girls has arrived – but where will it end?”
(Synopsis from the publisher)

This has been widely compared to Margaret Atwood’s The Handmaid’s Tale and, on the surface, it’s easy to see why – the framed ‘book within a book’ narrative introduces the story via a male writer’s manuscript, written hundreds of years into the future, in which he presents his imagined history of how men were once the dominant gender until women developed the power to emit electricity from their bodies and eventually led to the matriarchy in which he lives – the manuscript is ‘taken’ by the female author, Naomi Alderman, and presented as her own story since his story would likely not receive the same acclaim as a female author’s would. This imagined history is not dissimilar to the framing of Atwood’s The Handmaid’s Tale and with the novel’s consideration of gender politics, it’s not a leap to see why.

“This is the trouble with history. You can’t see what’s not there. You can look at an empty space and see that something’s missing, but there’s no way to know what it was.”

Although Atwood’s influence is outwardly acknowledge by Alderman, in The Power, women are suddenly in possession of extraordinary physical power meaning they are able to physically overpower their male counterparts and rule many societies through violence and fear associated with this female-held power. Alderman’s narrative world is much bigger than Atwood’s; whereas Atwood is concerned on an insular theocratic society named Gilead in which declining birth rates has led to still-fertile women being bound to produce children for upper class infertile couples, Alderman’s near-future society instead places the power in women’s hands (quite literally), when it’s found that, all over the world, a generation of girls’ skeletons contain a “skein” through which electrical currents are conducted and can be channelled into their hands. Intriguingly, however, it’s not a simple reversal of gender roles and gender politics, but instead bigger questions are posed – primarily, whether you’d act if you had the power to overpower others, or if the mere threat of using such power would be enough to subjugate others to your will.

“The truth has always been a more complex commodity than the market can easily package and sell.”

I was pleasantly surprised (and horrified) by the visceral lengths to which this story went. Alderman doesn’t baulk at presenting the possible cruelty and brutality people would enact over each other if they knew they could get away with it. Multiple scenes of mental and physical abuse are suggested, along with sexually explicit scenes which may be difficult for some readers to read, and the visceral nature of the scenes “on the ground” are seen through the eyes of one of the few male characters, Tunde, who is a guerrilla journalist filming the uprising of the women of the world, and documenting the various pockets of women across different continents who create female-only societies and armies. They band together, they organise, they become unstoppable and cruel… essentially because they can. As parallels can be drawn to “real life”, it doesn’t make for very comfortable reading at all, and this book is designed to make you feel incredibly uncomfortable about the actions of pretty much every character. There aren’t “good guys” and “bad guys”, everyone is more complexly presented and I think that’s a relief because this novel could have very well felt nothing more than a gimmick were it not for the strength of Naomi Alderman’s character building and development.

Much as I deeply appreciated the geographical sweep of The Power, I also enjoyed how it showed various different levels and classes of society. We got to see how this newly discovered female power affected society through its religion, its education, its politics, its culture, and each had clearly been carefully considered by Alderman when planning her novel’s narrative – whilst it may not have been the most action-packed of the storylines, I particularly enjoyed following the deputy mayor as she navigated her usual local government politics and when she realised how she could use the people’s fear of this burgeoning power to shape her own educational policy for girls affected by the change. I thought this was a canny look into an element of the society that it would have been so easy to neglect in favour of telling the bigger, more action-packed story line of women forming armies or attacking men in gangs and taking them as slaves.

“We’re only pretending everything is normal because we don’t know what else to do.”

In conclusion, The Power has received a lot of critical and popular acclaim over the past few years and I’d actually tend to agree with the majority that it’s well deserved. The brutality and unflinching tone of this novel may not be everyone’s cup of tea but it is a strangely engrossing page turner of a book – even when you’re witnessing something truly disgusting, you can’t quite look away from it and feel compelled to play witness to the crimes that Alderman imagines for this newly empowered generation of girls. It’s shocking and it’s salacious and, for me, it’s worth every bit of praise that has been heaped upon it.

“It doesn’t matter that she shouldn’t, that she never would. What matters is that she could, if she wanted. The power to hurt is a kind of wealth.”

2 responses to “Review | The Power by Naomi Alderman”