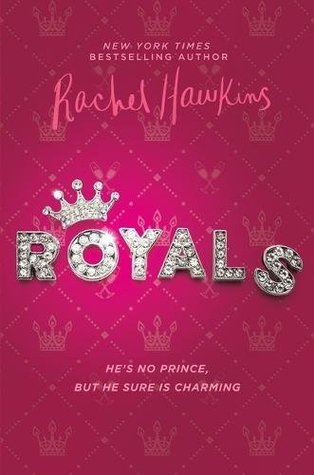 “Meet Daisy Winters. She’s an offbeat sixteen-year-old Floridian with mermaid-red hair; a part time job at a bootleg Walmart, and a perfect older sister who’s nearly engaged to the Crown Prince of Scotland. Daisy has no desire to live in the spotlight, but relentless tabloid attention forces her join Ellie at the relative seclusion of the castle across the pond. While the dashing young Miles has been appointed to teach Daisy the ropes of being regal, the prince’s roguish younger brother kicks up scandal wherever he goes, and tries his best to take Daisy along for the ride. The crown–and the intriguing Miles–might be trying to make Daisy into a lady… but Daisy may just rewrite the royal rulebook to suit herself. “
(Synopsis from the publisher)

Royals tells the story of Daisy, the younger sister of the girl who’s marrying into the Scottish royal family, and the teenager whose life is flipped upside down when she is whisked away to Scotland in an effort to contain/control the media circus surrounding her and her sister, Ellie. Ellie is painted as Daisy’s opposite and is so very prim and proper and ready to be the perfect royal spouse that all of the Scottish royals and their long-suffering media and comms staff have hoped for. Daisy, on the other hand, opens this book working in a boring cashier job at the local supermarket, about as far away from the highlands of Scotland as you can get. Obviously metaphorical worlds collide and she is snatched from her boring-but-predictable life and planted awkwardly into a world in which she (unlike Ellie) is not comfortable. Enter: the Wreckers, the friends and entourage of Ellie’s betrothed’s younger brother, Prince Sebastian. Of course, given their similar ages, Daisy finds herself drawn into this elite circle of posh boys, with all the teenage drama and media attention this commands.

“it just seems… I don’t know. So pointless. Waving at crows, cutting ribbons, being this ornament all because of an accident of birth. Or, in Ellie’s case, of marriage, I guess.“

The characters were fun and well-drawn, for a book of this sort. Daisy’s sister Ellie is everything you’d expect a smart, savvy princess-to-be to be, her fiancee Prince Alex is perfectly lovely and affable (but isn’t really explored all that deeply), Prince Seb is the predictably charming rake the tabloids claim he is, and all of his posho friends are equal parts annoying and somehow lovable for unapologetically being their annoyingly privileged selves. It’s kind of like the thrill you might get watching Keeping Up With the Kardashians, The Real Housewives or Made in Chelsea – it’s that weird sort of guilty pleasure which comes from watching rich (and sometimes dumb) people cavort about having larks and being scandalous, even though you know it’s exaggerated or much too dramatic to be actually true. I don’t think it’s a spoiler to say that Royals also combines this frothy fun with many a trope that the average chick flick or chick lit reader will deeply appreciate, principally the Fake Dating trope which we all know leads to something more. Likewise, Prince Seb turns out to have something more underneath the self-cultivated Playboy Prince persona than he’d have everyone believe, and his and Daisy’s relationship was one of the more endearing parts of the novel’s progression. Similarly, obviously I had a massive soft spot for Miles because a) the novel wants me to, and b) he’s like he is and I’m me – if you know anything about me, you will completely understand this to be true. But, in the end, the predictability of this story is what is, in a weird way, completely comforting – you know what you’re signing yourself up for, and I’m all for that when I’m in the right mood for it.

” ‘I’m looking for Seb,’ he says, lips quirking with irritation. ‘He’s not in his room, and my inner best friend alarm sensed he might be here, making bad choices.’
I open the door wider, letting Miles take in the fact that the man who’s second in line for the Scottish throne is currently out cold on my floor”

The unfortunate disappointment of the book for me was in the backstory. Now, I did not expect a book of this type to be heavy on the backstory; I know what I signed up for, and I expected lighthearted fun and nothing more. However, considering how much of a History buff Rachel Hawkins clearly is (if you haven’t checked out her Sexy History series on Twitter, you’re missing out), I found her skirting-around the backstory of the Scottish monarchy to be a tad disingenuous. It wouldn’t have taken that much to fix it – have an Info Dump courtesy of Seb/Miles to Daisy when she arrived in Scotland? (Unsubtle, but would have done the job.) In many ways, this is an alternate history (of sorts) because Hawkins seemed to be working from the idea that the Union of the Crowns back in the 17th century didn’t happen, so Seb and Alex could conveniently be princes of Scotland and make allusions to their English “cousins” (i.e. Prince William and Prince Harry). This is fine, I’d be completely willing to suspend the disbelief, if it was ever given enough time in the narrative to be explained, even briefly.** If it had been, it might have gone some way to counteract the Scottish stereotyping that then occurred, complete with tartan, bagpipes, and kilts. Given that the author is clued up on history (and is no stranger to popularising it), I can only assume it was an editorial decision from the publisher somewhere along the line – I’m not angry about it, I’m just disappointed in the decision, to be honest.

“He just showed up like a posh vampire I accidentally invited in, then couldn’t make leave.”

All that being said, I can’t deny that a lot of why I enjoyed this book so much was that the entire weekend was a bit royal-heavy given the aptly timed wedding of Prince Harry and Meghan Markle – after this I went on a bit of a binge of all things princess which included reading this book in practically one day and watching A Christmas Prince, Prince and Me, and Princess Diaries. All of that media is just damn fun and funny and enjoyable – you don’t need to look too far for deep meaning or bigger issues (if you don’t want to, though it’s there if you do want it), but it’s mostly just good clean fun that’s fluffy and light. Royals proved no exception to that rule. Good circumstance and timing meant I fell for this book and its charming heaps of fun, hook line and sinker, and I wouldn’t have had it any other way.

” ‘I can’t be responsible for maiming you if you do that thing with your face.’
‘What thing with my face?’ Miles asks, doing exactly that thing. It’s this lifting of his chin and tightening of his jaw that makes him look like he’s about to oppress some peasants…”

** For a fuller explication of the Scottish Problem (as I’ve dubbed it), you should check out Cait’s wonderful review – whilst I rated the book higher than she did, I fully stand by her criticisms regarding the setting, and agree that you need to know this going into Royals so that you can decide if you think you could park its problems and enjoy it or not.