Welcome one, welcome all, to my September Wrap Up. As a month, September was pretty great for one key reason – I started off the month with a quick jaunt to Barcelona, a city I’ve never been to before despite having frequented coastal Spanish towns for yearly family holidays since I was 18 months. How I managed to reach almost 26 years old having never visited Barcelona, I don’t know. But I’m SO glad I finally got to see it because it was beautiful and I loved the city and it’s a place that I know I will be visiting again in the (hopefully near) future. 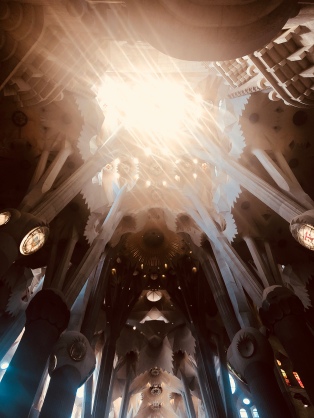 September also brought my friends’ wedding which was a whole experience. The trip meant a long weekend spent in the ever picturesque Cambridge and having that city as a backdrop for your wedding makes for a rather lovely day indeed. I’m so incredibly happy for my friends and it made me realise suddenly that yep, we’re now officially all grown ups and I should expect many more of these sorts of events in the future. (Also, side note for Future Emma in case she somehow miraculously ends up getting married: have a ceilidh at your wedding reception, they’re so much fun.) Since I was spending time with school friends (some of whom I haven’t seen properly for a sustained period of time for years), reading wasn’t exactly a priority. So that was a good portion of September taken up by, you know, going outside and doing things and socialising. 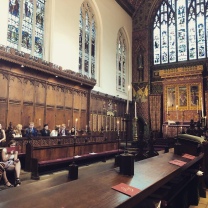 Because of all this, you will see from the statistics below that my reading pace took a sharp nose-dive this past month. I don’t know what it was – being on holiday for the first week and spending too much time eating paella to think about reading whilst there, or having fun at a friends’ wedding, or just not really finishing as many books as I started this month. On which note, I am halfway through the audiobook for V.E. Schwab’s latest release City of Ghosts and I’m reading A Discovery of Witches which is taking… a while to get through. What’s more, I’m not sure when I’m going to finish either of these current reads because with the dawn of October comes Victober and thereby a restricted monthly TBR. Still, before I turn to October, let’s break down September, shall we?

In terms of format: 1 was hardback and 2 were paperback.

As for genre, 1 was historical fiction; 1 was YA dystopian; and 1 was fantasy/sci-fi.

Onto the books themselves…

The Seven Husbands of Evelyn Hugo by Taylor Jenkins Reid

Rating: 5/5
Genre: historical fiction
Format: paperback
Pages: 389
Read: 3rd – 10th September
Review: “The Seven Husbands of Evelyn Hugo is a story that starts simply and frivolously enough but quickly becomes engrossing and emotional as you begin to understand the woman at its core and the truths of her life, behind the headlines that the tabloids are so keen to report on this Hollywood glamour icon. Although the story is set in the present day, and largely recounts Evelyn’s life between the 1960s and 1980s, the questions raised by the trials and tribulations in her personal but more importantly her professional life are just as (if not more) timely in the entertainment industry today.” (full review here)

Rating: 4/5
Genre: fantasy/sci-fi
Format: paperback
Pages: 340
Read: 11th – 20th September
Review: It’s taken me three attempts to read Vicious. Although I had some issues with the execution, the concept is intriguing: a couple of college kids think they can play god by inducing NDEs (Near Death Experiences) which will then transform them into EOs (ExtraOrdinaries) aka superheroes, to you and I. Considering I like MCU films, superheroes (and maybe supervillains) should be right up my street, as well as any discussion about the ethics of this. Neither protagonists are perfect or, indeed, particularly likeable. Similarly, despite their scientific (and personal) curiosity in EOs, neither boys are particularly heroic and the great strength in the book lies in the area of extremely grey morality in which Victor and Eli both operate. I ended up feeling more endeared to this book than I otherwise would have simply because V wrote it but, throughout reading Vicious, I was constantly thinking that you could tell she has grown as a writer since this book – and the proof of this will undoubtedly lie in the book’s sequel, Vengeful, which was released recently. (full review to follow)

* The Bone Season by Samantha Shannon

Rating: 4/5
Genre: young-adult; dystopian; paranormal
Format: hardback
Pages: 466
Read: 1st – 22nd September
Review: I adore Samantha Shannon’s paranormal dystopian series and it was high time I did yet another re-read, starting with this, the first book in the Bone Season series. Set in a near-future London in which a corrupt government named Scion controls the city and clairvoyant gangs rule the criminal underworld, this first book introduces Paige Mahoney, a clairvoyant of the “dream walker” variety who is part of an aforementioned gang until she finds herself captured and whisked away to a secret location/community by the government (apparently). Every time I read the book, I find a different aspect more intriguing and this time, I was really stuck by the strange socio-political dynamic between the “red jackets” aka those faithful to the people in charge and the “yellow jackets” aka the alleged “cowards” who refused to be cowed/controlled by those in charge. There’s a level of shaming that I hadn’t previously focused in on during previous re-reads and that, for one, illustrates just how rich Samantha Shannon’s story is – you can read it on the surface and have a fun story about criminal clairvoyant gangs or you can delve a bit deeper and find something that deals with more pressing social and cultural questions than you might initially expect. (full review to follow)

How did your September reading go?
What was your favourite book you read this month?
Please do share in the comments below and let’s chat books!