Welcome one and all to this week’s Top 5 Wednesday post! For those of you who don’t know Top 5 Wednesday is a weekly meme/challenge which was created by the wonderful Lainey from gingerreadslainey and is now overseen by the equally lovely Sam from Thoughts on Tomes. Every Wednesday, participants devise their Top 5 based on a given topic.

This Wednesday’s topic is Most Anticipated 2019 Releases: Pretty explanatory. If you can’t narrow it down, give your selections for only the first half of the year or even just for winter 2019.

When I first saw this topic on the Goodreads group, I thought I would struggle to come up with 5 books for my list, as I’ve been feeling a little out of the loop when it comes to new releases. I had thought that I was pretty content with the set of books I had on my physical TBR and that there weren’t too many books I was waiting for that hadn’t yet been published. Turns out I was wrong and there are indeed a few releases that are making me wish away the rest of 2018 so that 2019 is closer.

I really don’t know what to expect from this as it’ll be the second book from Erin Morgenstern, author of the phenomenally enchanting The Night Circus. The synopsis promises a masquerade party in New York, a subterranean library, twisting tunnels and lots of magic. That sounds plenty good enough for me. 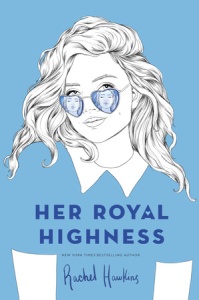 5. Her Royal Highness (aka Royals 2) by Rachel Hawkins

I read the first book, Royals, this year and it was a lot of fun, once you ignore the entire idea of a Scottish royal family. But, hey, if you’re already suspending the disbelief anyway, what’s a little bit more? Since it took place largely in Edinburgh, I really enjoyed the first book. I’m not sure what this second book will bring but since it’s about the Princess Flora at boarding school I’m sure it will be a hell of a lot of fun.

4. The Kingdom of Copper by S.A. Chakraborty

Once again, we have another sequel, this time the second book in the Daevabad Trilogy, a fantasy story featuring djinn tribes and warriors and fire and (my favourite) court politics. The first book was complex but compelling and I loved reading it. I’m way overdue a re-read of it but I’m hoping to do so shortly before the second book is released so I can soak up all the magic of Daevabad at once. 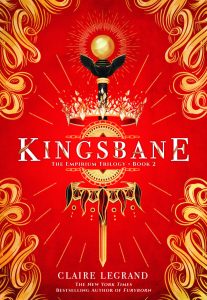 Guess what? We have another sequel on this list! This one is the second book in the Empirium… trilogy (?) whatever it is, this is the sequel to Furyborn which was a stunning story which I didn’t expect to love nearly as much as I did. I found it so compelling and it somehow felt like a fresh fantasy story which is… uncommon when you read as much (especially YA) fantasy as I do. I loved the characters and relationships and the tone of the story was exactly what I love, a little bit/a lot of darkness. I’m really hoping that the sequel will love up to my expectations and that I will continue to love this epic story.

2. The Priory of the Orange Tree by Samantha Shannon

I’m a big fan of Samantha Shannon as a writer, as someone to follow on Twitter, and just as a human being in general, so it’s probably no surprise that I’m anticipating this, her first adult fantasy novel. This promises to be a huge chunk of a book featuring assassins, mages, magic, and dragons so, I mean, why wouldn’t I be anticipating it in 2019? This is due to be published in February and I cannot wait – it’s going to be incredible, I have very high hopes for it, but I trust Samantha Shannon and know I won’t be disappointed in the least by this book.

1. King of Scars by Leigh Bardugo

You don’t exactly need to be an avid follower of this blog to know that I LOVE the Grishaverse, in fact you just need to casually peruse a tag or two to realise how often I go on about Six of Crows. However, one of my favourite characters in the Grisha world will forever be Nikolai Lantsov. After the gruelling events of Ruin and Rising, the third and final book in the Grisha trilogy, he was affected forever and I look forward to seeing how the fall-out from this will affect the start of his rule as the young king of Ravka. I NEED this book like… yesterday, so I cannot WAIT to get my grubby little hands on it.

What books are you looking forward to in 2019? Do you have a Top 5 Wednesday post for this week? Be sure to link me below if you do!