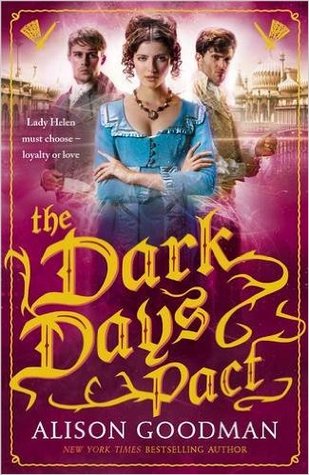 “Brighton, July 1812. Lady Helen Wrexhall is spending the summer season in Brighton, where she will continue her Reclaimer training and prepare for her duties as a fully fledged member of the Dark Days Club. Her mentor, Lord Carlston, believes that a Grand Deceiver has arrived in England, and there is no time to lose in preparing Helen to fight it. As she rushes to complete her training, Helen finds herself torn between her loyalty to Carlston and the orders of the Home Office, who wish to use her to further their own agenda. Meanwhile, the Duke of Selburn seems determined to try and protect her, irrespective of the risk to himself. With so much at stake, Helen must make an agonizing choice between duty and devotion.” (Synopsis from publisher)

Second in the Lady Helen series, The Dark Days Pact tells of the continuing adventures of Lady Helen Wrexhall, now newly minted Reclaimer-in-training, under the tutelage of the slightly shady Lord Carlston. The action moves out of London into Brighton, as Lady Helen was largely disowned by her family because of the events at the climax of the first book, The Dark Days Club. Now, Lady Helen uses her relative freedom to her advantage, starting in earnest her training to become a fully fledged member of the Dark Days Club. Obviously, things don’t go entirely to plan.

“According to his lordship, she still needed to deepen her voice, be less careful with the placement of her arms and legs, and now also take up more space. No easy task since she had spent most of her life learning to control any excess gesture or movement.”

What appeals to me most about these books is the mixture of Georgian-era manners and etiquette when offset against the fantastical elements of demons which Lady Helen and Lord Carlston must fight against. The practicalities of this come to a head in this second book, as Lady Helen learns she must adopt the clothes and mannerisms of a man in order to be able to accompany Carlston on the type of rendezvous which demon-hunting necessitates. Cue: hilarity, as Helen initially is terrible at imitating a man, and then awkwardness (and a hint of sexual tension) when she adopts them a little too convincingly and yet Carlston still flirts with her. There’s a particularly memorable incident of the sorts in a brothel.

“Slowly he turned into the curve of her palm, cut lip pressed against her skin. She heard two whispered words, felt them kissed into her flesh: amore mio. My love. Two words: the shock of them held her still.”

This sequel really benefited in having the time and space to devote to the series’ minor characters, particularly Mr Hammond and his sister Lady Margaret. I enjoyed the development of Hammond’s character in particular as he turned from a merely functional character to one you could actually empathise with and root for. The Duke of Selburn is lurking, as ever, forming his point of the inevitable love triangle between him, Lady Helen, and Lord Carlston. And something tells me that Selburn will win out in the end, if Lady Helen is at all sensible. One character was conspicuously absent and present somehow at the same time: Helen’s brother, Andrew. I can only presume that this absence will become an important plot point in the third book, The Dark Days Deceit, otherwise I fail to see the point in mentioning his letters and his allegedly imminent arrival in Brighton through The Dark Days Pact, only to have it never manage to happen by the end of this book.

” ‘Love him?’ Helen’s voice rose. ‘Apparently I am not
allowed to love in this godforsaken world!’ “

In conclusion, this sequel was very amusing and entertaining as we see Lady Helen begin to take her first steps in the Reclaimer world and start to assert herself in this rather masculine world. To do so she must fight against pretty much all the etiquette and social norms she has been raised to uphold, and this proves to produce some incredibly amusing shenanigans throughout the series. There was a darker undertone to this book, and a more present undercurrent of social classes and politics, which Goodman can now explore in the context of the fantastical elements of this novel thanks to the bedrock she built in the first book and then developed in this second instalment. I can’t wait to see what dark and shady corners the climax of this trilogy will take its readers into in the final book, The Dark Days Deceit.

“The warmer weather had enticed very few visitors into the town centre, and the shops and amenities that clustered around the Steine had an air of disappointed expectation. Then again, Helen conceded, half past eleven was counted as obscenely early for many of the fashionable set.”

One thought on “Review | The Dark Days Pact by Alison Goodman”