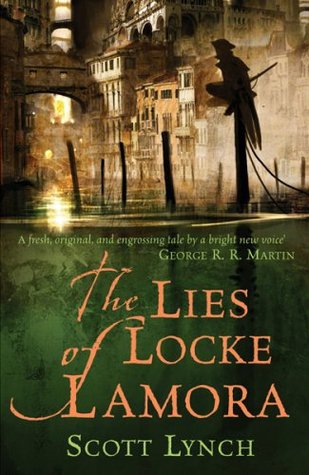 “They say that the Thorn of Camorr can beat anyone in a fight. They say he steals from the rich and gives to the poor. They say he’s part man, part myth, and mostly street-corner rumor. And they are wrong on every count. Only averagely tall, slender, and god-awful with a sword, Locke Lamora is the fabled Thorn, and the greatest weapons at his disposal are his wit and cunning. He steals from the rich – they’re the only ones worth stealing from – but the poor can go steal for themselves. What Locke cons, wheedles and tricks into his possession is strictly for him and his band of fellow con-artists and thieves: the Gentleman Bastards.” (Synopsis from publisher)

Set in a fantastical version of Renaissance Venice, The Lies of Locke Lamora tells the story of the famed thief of Camorr. It opens on a scene where the Thiefmaster, a despicable character in his own rights, is about ready to kill the eponymous orphan boy, Locke Lamora – we then follow Locke’s antics as he grows up under the tutelage of Father Chains, a conman priest who tutors him in things of a less divine nature, and becomes part of a gang named the Gentleman Bastards. Through the flashbacks embedded into the narrative, the readers are introduced to Locke’s upbringing and how he got to be the character who plots elaborate short and long cons to trick the rich of the city out of their money and possessions.

” ‘Gods, I love this place,’ Locke said, drumming his fingers against his thighs. ‘Sometimes I think this whole city was put here simply because the gods must adore crime. Pickpockets rob the common folk, merchants rob anyone they can dupe, Capa Barsavi robs the robbers and the common folk, the lesser nobles rob nearly everyone, and Duke Nicovante occasionally runs off with his army and robs the shit out of Tal Verarr or Jerem, not to mention what he does to his own nobles and his common folk.’ “

One of the biggest draws of this book for me was always going to be the setting and world-building – I’m quite the sucker for fantasies set in a Renaissance world, especially those inspired by Italy. This novel really used the setting to its advantage, describing vividly a city state ruled over seemingly by an untouchable, unseen Duke Nicovante but really under the control of the criminal underworld lead by a figure called Capa Barsavi which lurks in its many backstreets and alleys. The cast of characters therefore was vast, but always rooted around the Capa and his underlings of garristas, heads of smaller gangs who all owe allegiance (and taxes from their takings) to the underworld’s leader. One of these gangs is the Gentleman Bastards – consisting of Father Chains, their not-so-priestly mentor, Locke Lamora, Jean Tannen (the Little John to Locke’s Robin Hood), snarky twins Calo and Galdo Sanza, and enthusiastic young lookout Bug. Together, they learn everything from cooking to lock-picking, mathematics to the art of disguise, reading to pick-pocketing – every weapon a budding thief might need in his arsenal in order to secretly mingle with every strata of society and pull of heists from the rich and poor alike.

“It was strange, how readily authority could be conjured with nothing but a bit of strutting jackassery.”

For such a dark book, The Lies of Locke Lamora seamlessly blended in a wry sort of humour in the narrative voice. I laughed a lot during the course of this book which is weird because this book also went to some frankly stomach-turning places as, at times, Locke and friends found themselves in the literal shit. But because there was a very dark undertone, the humour was therefore all the funnier when it did happen – the two weirdly complemented each other very well. The story didn’t just tell you Locke was a sarcastic literal shit, it proved it by having him say daring (read: stupid) things to very dangerous people and somehow walking out of that situation on top. Every claim it made about Locke’s cunning and ingenuity was proven by the narrative – it didn’t just tell you the Gentleman Bastards were clever con men, it showed you it too, something I very much appreciated having read many a fantasy book which tells you people are badass without actually providing any evidence of that. The story also never pandered to its main characters; it never made things impossibly easy for them to achieve which, again, is something so prevalent in a lot of fantasy, unfortunately. Locke Lamora never did that, it doesn’t make things easy for its characters (big or small) and it certainly takes no prisoners.

” ‘Someday, Locke Lamora,’ he said, ‘someday, you’re going to fuck up so magnificently, so ambitiously, so overwhelmingly that the sky will light up and the moons will spin and the gods themselves will shit comets with glee. And I just hope I’m still around to see it.’
‘Oh please,’ said Locke. ‘It’ll never happen.’ “

In conclusion, I think what I enjoyed most about The Lies of Locke Lamora was that it stuck to what it said it would be – the story of a gang of ruthless and, at heart, selfish criminals. It’s so easy for an author to make their criminals redeemable, to have them pretend not to care about the poor but then actually subtly give them the money they had stolen from the rich. Scott Lynch doesn’t do that with the Gentleman Bastards, he allows them to be conniving and trick innocent and guilty people because he’s still able to make them characters that you can root for because they’re so clever and daring. Locke Lamora is a man, a myth, a legend, but he’s nothing particularly imposing or impressive at first sight, and it’s this element that makes the book so interesting, in my opinion. I cannot wait to see what further character development is done with Locke and his brother-in-arms Jean in the sequel, Red Seas Under Red Skies.

“There’s no freedom quite like the freedom of being constantly underestimated.”