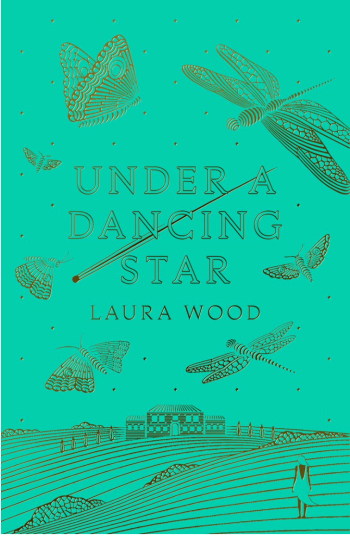 “In grey 1930s England, Bea has grown up kicking against conventions. There are so many rules. She must marry. She can’t choose. She must keep the family estate safe. But when Bea goes to spend summer in Italy, a dazzling new world opens up. There are moonlit nights, and beautiful vistas – and Ben. A cocky young artist who just happens to be infuriatingly handsome too. One night, under the stars, their friends set them a challenge. It’s a duel of kisses. The rules: sparks must fly. Dreams must come true. Neither party may fall in love. A long hot summer of kisses and mischief unfolds. But storm clouds are gathering across Europe. Is their perfect summer ending? Or is this just the start?” (Synopsis from publisher)

When I heard that there was a Much Ado About Nothing inspired story being published, I was already hooked. When I heard that it was YA, I was encouraged. When I heard that it was set in between-the-wars Europe, I was sold. Laura Wood has somehow managed to bottle that feeling of a hazy, otherworldly summer spent in the Italian countyside, an artist’s retreat at a villa cut-off from the rumblings of fascism and war on the continent,  without at all demeaning the importance of the historical and political context in which she has chosen to set her story. Much Ado is one of my favourite Shakespeare plays so I was always bound to be a little bit sweet on this story but I was pleasantly surprised by just how much I came to enjoy this tale of bickering Bea and Ben.

“He turns to the girl on his left and for the first time I see his famous charm at work. He turns it on her like a spotlight, laughing at her jokes, teasing her, drawing her out so that soon she is laughing and blushing. I watch for a while with great interest. It reminds me of the way birds preen and sing during courtship rituals. Ben glances across, and I arch my eyebrows appreciatively, congratulating him on what is, after all, a brilliant performance.“

The setting is sumptuous and evocative. If you’ve seen the 1990s film adaptation of Much Ado directed by Kenneth Branagh and starring him and Emma Thompson as the eventual couple then you will absolutely adore Under a Dancing Star as it shares much the same feeling and mood. Rather than the play being framed around soldiers coming home from the wars, this novel is instead centred around a group of artists (writers, painters, sculptors etc.) who converge on the villa of Bea’s bohemian uncle Leo, his artsy fiancée Filomena, and his daughter Hero, for the summer in the hopes of feeling inspired and encouraged to pursue their various art forms, to be celebrated in an exhibition at the end of the summer.

” ‘It’s just so beautiful.’ I try to find the words. “Sitting underneath the bougainvillea and all the stars, eating this food and being with you. It’s… it’s… almost too much. If I wasn’t seeing it myself I wouldn’t believe such a place was real.’
Klaus nods. ‘I understand,’ he says. ‘It is why it is the perfect place to make art. It is a thrill, yes, for all the senses. As if you are seeing everything in brighter colours.’
He is right, of course, and for a second, I catch a glimpse of what it might be like to be an artist, just a little of what they are doing here. And the feeling is delicious.”

This setup places Bea as something of an outsider to this world – she is intellectually-minded and curious, interested in insects and studying the natural scientific world – whilst everyone around her is talented in an artistic manner. Of course, Bea is also seen as an oddity back home by her parents because, as we see in a hilarious opening section of the book, she refuses to play by the normal rules of dinner party etiquette, she’s clumsy and ‘unladylike’, she’d much rather explore and get mud all over her hem than dress smartly and elegantly, and she often opens her mouth to voice an opinion rather than being the demure daughter eligible for marriage that they would prefer she be. As a heroine of this mould, and the first-person narrator of the piece, Bea is a fantastically outspoken and fierce protagonist.

” ‘Why should young women be left out of such conversations? After all, Vicar, we’re the ones who must become mothers ourselves, if the human race is to continue at all. It’s in the Bible, isn’t it? Be fruitful and multiple and all that.’ I wave my hand airily. ‘So, you must agree that to keep young women in ignorance when it comes to acts of sexual congress is nothing less than irresponsible.’
‘Acts of sexual congress!’ the vicar’s wife whispers, as Mother sways in her chair.”

Now to the artists. The characters of Much Ado are primarily reduced to the main players, Ben, Klaus, Ursula, and an antagonist to Ben called Sir Hugh. We don’t find out the backstory between Ben and Sir Hugh until much later in the novel but this element adds a perhaps much-needed and much-welcomed depth to the ‘Benedick’ character and his motivations that isn’t seen in the play itself. Similarly, the book also foregoes the slightly strange Hero death plot of the play – it’s hard to imagine how this might have been adapted, so it’s certainly worth pointing out that this is inspired by Shakespeare’s comedy and particularly the Beatrice and Benedick relationship rather than the narrative as a whole. When its boiled down to its core, the relationship is the stuff of, by now, well-worn tropes: witty bickering, antagonism leading to attraction, fake dating – it’s all the stuff I live for in my romantic comedies, and it is done to perfection in Under a Dancing Star. My heart ached for Bea and Ben during this novel and the setup of Ben tutoring her through a fun summer fling with him, before she returns home to England and is inevitably married off to a boring life/husband, was nothing short of inspired.

“The annoying smile remains in place and it makes me unreasonably angry that he seems so sure of himself. I squint at him, suddenly furious that his face is so perfect. Why does anyone need to have a face like that? It’s no wonder it leaves a girl feeling confused and off-balance.
‘Why are you looking at me like that?’ he asks.
‘Your face,’ I say, pointing an accusing finger at him, ‘is bothering me.’“

In conclusion, anyone who enjoys Laura Wood’s previous book, A Sky Painted Gold, is certainly likely to enjoy this story too, but it’s the people who enjoy the conceit of Much Ado About Nothing that I urge to pick up this book too. The book has a much more complex context underpinning it, for all its fun bickering on the surface – it highlights the rise of fascism and nationalism, obviously intrinsic to the between-the-wars time period in which Laura Wood chooses to set her take on this story, and its serious undertone helps to make the potentially darker moments all the darker, and the lighter all the lighter for it. However, if your favourite part about Much Ado is the playful bickering, the obvious chemistry between Bea and Ben, and the joy of watching them both fall for each other, then you’re sure to love this retelling of their story – in particular, the very last line of the book is sure to warm your Shakespeare-loving heart.

” ‘But I do seem to be loved by most ladies. You, Beatrice, are the exception.’
‘How nice to be considered exceptional,’ I murmur, the dryness in my tone matching his own.”

3 thoughts on “Review | Under a Dancing Star by Laura Wood”