After a few weeks of no-shows for Top 5 Wednesday, I am firmly back on the bandwagon. For those who are unaware, Top 5 Wednesday is a weekly meme/challenge organised by the wonderful Lainey, in which participants devise their Top 5 books based on a given topic – because who doesn’t love a good list?

This week’s topic is ‘Fictional Items You Want’. So, this week, I will be choosing the top 5 fictional items that I would love to own, if only fiction were a reality. (It won’t surprise anyone to learn that when brainstorming a list I initially came up with several from Harry Potter!) You can find them below in ascending order, though of course I wouldn’t turn my nose up at any of them! “More than anything, the journal wanted. It wanted more than it could hold, more than words could describe, more than diagrams could illustrate. Longing burst from the pages, in every frantic line and every hectic sketch and every dark-printed definition. There was something pained and melancholy about it.”

Unsurprisingly, I love Richard Gansey III and his slightly crazed obsession with Glendower. It’s because of this that I would love to own the culmination of all his genius (and crazy) which is embodied by his leather journal in which he keeps all his thoughts and research from his search for the Welsh king. As Blue observes when she finds it, it belongs to someone who doesn’t just want to quickly keep track of the information he finds, but who also loves the process of the research itself, something which I can sympathise with after having a hell of a good (if stressful) time whilst researching and writing my BA and MA dissertations.

4. The Iron Throne (from George R.R. Martin’s A Song of Ice and Fire series)

“Have you ever seen the Iron Throne? The barbs along the back, the ribbons of twisted steel, the jagged ends of swords and knives all tangled up and melted? It is not a comfortable seat, ser. Aerys cut himself so often men took to calling him King Scab, and Maegor the Cruel was murdered in that chair. […] It is not a seat where a man can rest at ease.”

As much as the amount of bloodshed around it is terrifying, and I’d probably do something about putting a nice cushion on it so it was less stabby to sit on, I’d love to own the Iron Throne… and I’m sure my reaction to owning it would go something like when Leslie gifts Ben a replica of it on Parks and Rec.

“The Firebirds glinted in his palm. They looked like odd, asymmetrical bronze lockets – maybe jewelry fashioned in the era of Art Nouveau, when organic shapes were all the rage. One of the metals inside was rare enough that it could only be mind in a single valley in the whole world, but anyone who didn’t know better would just think they were pretty. Instead the Firebirds were the keys to unlock the universe. No – the universes.“

Who wouldn’t want the ability to travel between times, locations, and dimensions? I’d use Marguerite Caine as a cautionary tale, of course, and ignore the swathe of practical and ethical issues raised by such dimension hopping into, essentially, other people’s bodies. If I wound up in the Russia Marguerite ends up, with a certain Russian captain, that would be acceptable too, minus any threats against my life, obviously. 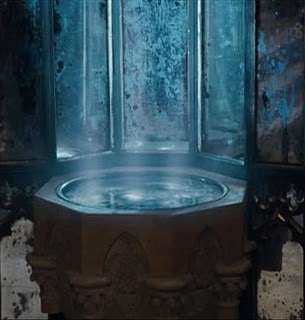 “One simply siphons the excess thoughts from one’s mind, pours them into the basin, and examines them at one’s leisure.”

Memories and thoughts are so temporal and fleeting, it’s a constant source of frustration. The Pensieve is, simply put, a genius idea, and if it existed it would be so incredibly useful. Anything that grapples with the concept of being able to harness or solidify or bottle up memories is one which always captures my attention, so it’s unsurprising that when I first read about Dumbledore’s Pensieve I immediately warmed to the idea of it. Also, who doesn’t love a nice bit of punning wordplay?

“Meanwhile, the poor Babel fish, by effectively removing all barriers to communication between different races and cultures, has caused more and bloodier wars than anything else in the history of creation.”

I speak Spanish, not very well, though allegedly my level is at a professional working capacity – ha. One thing that has always frustrated me, however, is that I am not brilliant at language learning, and I truly envy those that are – those insanely clever people who are fluent in more than just their native language, I have a hell of a lot of respect for them. So, of course, I would like the cheat’s way out – and that is the Babel fish! The opportunities that universal language acquisition could provide are wonderful and I think I’m slightly more optimistic than Douglas Adams because I don’t foresee quite as many wars as he does!

Do you have a Top 5 Wednesday list for this week? Share below, I’d love to check it out. Alternatively, perhaps leave a comment of what fictional objects you would love to own.