Here we are, a mere 5 weeks after from my Book Haul #3 and I have another stack of books. No one is surprised. Once again I hate myself for having bought this many books. But will I ever learn?! Probably not. So, for the foreseeable future, I will continue to haul books and hate myself inside a little. It’s fine, it’s fine, at least I have shiny new books to comfort me during my times of loathing. Let’s see the fruits of my loathing, shall we? 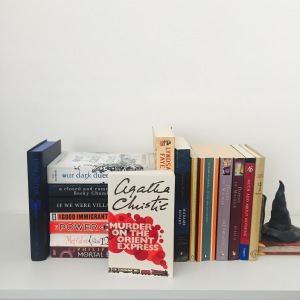 Harry Potter and the Philosopher’s Stone (Harry Potter #1) by J.K. Rowling
In a turn of events that surprises precisely no one, I fall for marketing every single time and so I bought the 20th Anniversary/Ravenclaw House edition of the first Harry Potter book. Between these and the illustrated editions and needing to purchase a set of paperback copies I can read (my hardbacks are getting fragile), I’ll end up owning way too many Harry Potter books… but I’m kind of okay with that.

Murder on the Orient Express (Hercule Poirot #10) by Agatha Christie
After seeing the trailer for the upcoming film adaptation I realise I had never read a single Agatha Christie book which is a huge shame that I fully intend to correct! Hence, I bought this. I’m a little torn on whether to read the book or watch the film first because, either way, one or the other is going to be entirely ruined. When it comes to it, I’ll probably read the book because it’s the book.

Our Dark Duet (Monsters of Verity #2) by V.E. Schwab
I adore Schwab’s Darker Shade of Magic series and I liked the first book in this series, This Savage Song, well enough to pick up the sequel when I spotted it in Waterstones a few days prior to its official publication – that felt a little bit like fate and I had to buy it. Plus it was on Buy One Get One Half Price offer with this next book…

A Closed and Common Orbit (Wayfarers #2) by Becky Chambers
Once again this is a sequel to a book which I very much enjoyed. Well, a sort of sequel, a companion of sorts to be more accurate, I think. I adored The Long Way to a Small Angry Planet because it really did read like sci-fi for people who aren’t big into sci-fi – it focused more on the characters and their dynamic and relationships and I loved that about it, so I’m sure the companion novel will be similar in that respect. 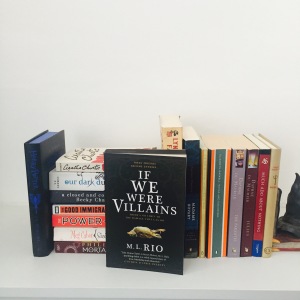 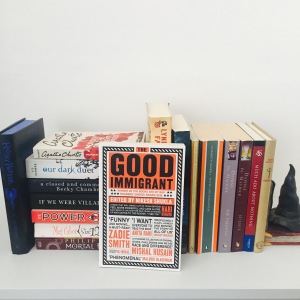 If We Were Villians by M.L. Rio
Funny story – I entered a giveaway for this via TitanBooks’ twitter page and then I caved anyway and bought the US hardback because it is beautiful. Then I ended up winning the giveaway so I have the UK paperback too – yay! (It has black sprayed edges, just fyi.) I’m sure you’re sick of me saying I love the idea of this because it has been marketed as Donna Tartt’s The Secret History but with Shakespeare things. Yes, please.

The Good Immigrant ed. by Nikesh Shukla
I went into Waterstones (always a terrible start to a sentence, isn’t it?) and I wanted to buy something because I kinda feel crappy about ordering via Amazon so much. And I remembered that I keep looking at this book and not buying it. Probably because it takes a lot for me to actually get to reading non-fiction, but I am trying to be better at that. And this collection comes very highly recommended from so many people. So I bought it and I’m going to read it. 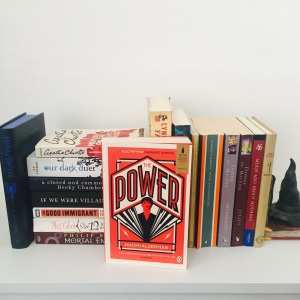 The Power by Naomi Alderman
On the aforementioned Waterstones trip, I needed another book for a ‘Buy One Get One Half Price’ offer to pair with The Good Immigrant and that’s when I noticed that a book I wanted was included so I had to have it. You’ve probably seen this book everywhere – it won the Baileys Women’s Prize for Fiction recently so I want to see what the fuss is about. The concept is that women develop the power to shoot electricity from their fingers and they become the dominant gender over men. So, yeah, let’s see how that works out, shall we?

Size 12 Is Not Fat (Heather Wells #1) by Meg Cabot
I should be mildly ashamed by this purchase probably. But I’m not. I adored Meg Cabot’s Princess Diaries series when I was younger and a few years ago I randomly started reading her adult fiction (I already own an omnibus of Queen of Babble, for example) but I only ever borrowed this one from the library. I remember it being amusing, so obviously I picked up the first book. Bizarrely I already own the second – no, I’m not sure why I bought that and not the first one. Past Emma, wtf?

Mortal Engines (The Hungry City Chronicles #1) by Philip Reeve
I can’t believe I’ve never read this book/book series. It’s steampunky and there’s this concept called Municipal Darwinism which basically means that cities are now Traction Cities, they move via like… engines… or they’re on tracks or something, basically they’re motorised and they fight other cities for precious resources. Like, why haven’t I already read this? It sounds bonkers and absolutely brilliant!

Jane Steele by Lyndsay Faye
I’m not a fan of Bronte’s Jane Eyre so this book mostly passed me by when it was released – however, Kirsti from Melbourne on My Mind on YouTube raves about this book so I thought it was probably time to look into it again, and this promises to be a Gothic retelling of Bronte’s aforementioned novel. Now, something Gothic I can get into, and it tantalisingly rewrites the famous line as “Reader, I murdered him”. 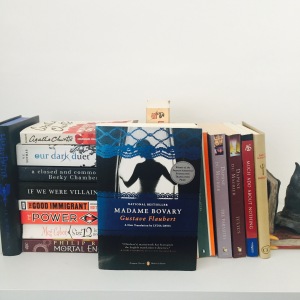 Madame Bovary by Gustave Flaubert
I’ve wanted to read Flaubert’s novel for years at this point. I actually tried to read it whilst I was at school but I think I was a little too young to be reading it, let alone to appreciate it fully. Then I bought a copy of it from (probably) a charity shop but it was a strange little hardback edition from Oxford World Classics and I never liked the layout of the text on the page so I always put off reading it. I’ve been coveting the Penguin Classics Deluxe Edition for months and I finally just caved and bought it because I strongly suspect this year might finally be the year I finally read Madame Bovary.

Where Angels Fear to Tread by E.M. Forster
If you have been around the blog for the last couple of months you might have heard me mention that I’ve been pleasantly surprised by how enjoyable and readable I’ve found some of E.M. Forster’s work, specifically A Room With A View and Howards End. It seemed only right to buy his first novel in a matching edition so I can (hopefully) read it soon and continue by journey through Forster’s work.

Wives and Daughters by Elizabeth Gaskell
I blame the Penguin English Library editions entirely for this purchase. Gaskell’s North and South remains one of my favourite classics (it probably helps that I adore the BBC miniseries) and I read Mary Barton for one of my university classes, but I’ve never tried any of her other novels since. Once again, I’ve been watching Kirsti of Melbourne On My Mind’s channel and she mentioned her love for this novel so I definitely need to give it a go, hence this purchase.

The Parasites by Daphne du Maurier
You may have noticed from my previous couple of book hauls that I’m slowly collecting these editions of Daphne du Maurier’s books. It’s somewhat difficult because Virago have reissued them in stunning new editions and it makes the older covers hard to find – charity and used book shops to the rescue again! 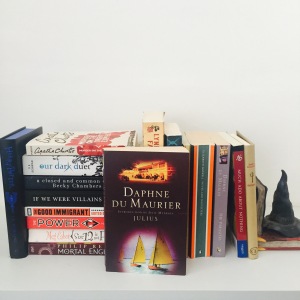 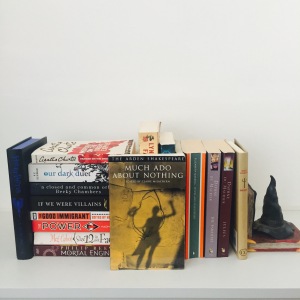 Julius by Daphne du Maurier
This is one of du Maurier’s earlier novels and I know precisely nothing about it. I kind of don’t mind that though. In fact, I intend to keep it that way, as du Maurier’s novels are infinitely more fun when you don’t know what to expect going into them.

Much Ado About Nothing by William Shakespeare
I already own a few editions of this play but it remains (probably) my favourite of Shakespeare’s comedies so I tend to accidentally acquire copies of it. I’ve bought a few of the Arden editions in the past few months and this was one of my latest finds in the local Oxfam bookshop. 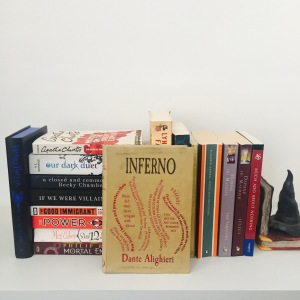 Inferno (The Divine Comedy #1) by Dante
Liz collects the Word Cloud Classics editions and recently ordered this one online – however, when it came she was disappointed (rightfully so) because the front was marked quite a bit. She wrote a complaint to the seller and they sent her out another copy which was less marked, so I ended up inheriting this copy of it. I wasn’t exactly going to say no to a free book, was I?