This Wednesday’s topic is Children’s Books: this can include Middle Grade (but try to recommend more than just Harry Potter and Percy Jackson!) Feel free to talk about your childhood faves or more recent reads.

Now, a few months ago, I did a post called The Books That Made Me, which featured a lot of my childhood favourites and explained how they made me the reader, and the person, that I am today. Unsurprisingly series such as Harry Potter, Sabriel, and The Princess Diaries featured on there. In a desire to not simply repeat that post, I’ve decided instead to interpret this week’s topic as Children’s/Middle Grade Books on my TBR – i.e. these are the books I think I would have loved as a kid and that the (slightly more) adult reader in me will probably still love when I get to reading them now.

5. All the Percy Jackson/Magnus Chase books by Rick Riordan (x)

This is a slight cheat seeing as how I have read (and thoroughly enjoyed) the first Magnus Chase and the Gods of Asgard book but I’m including it anyway. I tried to read the first Percy Jackson book and realised that I was maybe too old – younger Emma would have devoured these books because she loved Greek mythology (older Emma favours the Norse it seems), and these were just the right kind of ridiculous for her to have loved them. Maybe some day I’ll try to channel my younger self and pick these books up in the hope of understanding all the fuss – in their defence, I loved The Sword of Summer, so maybe I’m easily persuaded.

“Percy Jackson is a good kid, but he can’t seem to focus on his schoolwork or control his temper. And lately, being away at boarding school is only getting worse—Percy could have sworn his pre-algebra teacher turned into a monster and tried to kill him. When Percy’s mom finds out, she knows it’s time that he knew the truth about where he came from, and that he go to the one place he’ll be safe. She sends Percy to Camp Half Blood, a summer camp for demigods (on Long Island), where he learns that the father he never knew is Poseidon, God of the Sea. Soon a mystery unfolds and together with his friends—one a satyr and the other the demigod daughter of Athena—Percy sets out on a quest across the United States to reach the gates of the Underworld (located in a recording studio in Hollywood) and prevent a catastrophic war between the gods.” (Synopsis from Goodreads)

This book is about maps. That’s enough reason to want to read it, right? Did I mention that the world that the maps map contains continents that have been disrupted and exist in different time periods? Yeah, I know, cool, right? If you need more convincing, here’s the full synopsis I guess:

“She has only seen the world through maps. She had no idea they were so dangerous. Boston, 1891. Sophia Tims comes from a family of explorers and cartologers who, for generations, have been traveling and mapping the New World—a world changed by the Great Disruption of 1799, when all the continents were flung into different time periods. Eight years ago, her parents left her with her uncle Shadrack, the foremost cartologer in Boston, and went on an urgent mission. They never returned. Life with her brilliant, absent-minded, adored uncle has taught Sophia to take care of herself. Then Shadrack is kidnapped. And Sophia, who has rarely been outside of Boston, is the only one who can search for him. Together with Theo, a refugee from the West, she travels over rough terrain and uncharted ocean, encounters pirates and traders, and relies on a combination of Shadrack’s maps, common sense, and her own slantwise powers of observation. But even as Sophia and Theo try to save Shadrack’s life, they are in danger of losing their own.” (Synopsis from Goodreads)

3. The Girl Who Circumnavigated Fairyland in a Ship of Her Own Making by Catherynne M. Valente (x)

This book is the first in Valente’s Fairyland series so, if I enjoy it, there’s more books to come! Fairyland sounds a bit bonkers and a bit brilliant because of it. It seems very Alice in Wonderland so I’m sure it contains adventures equally as weird and wonderful.

“Twelve-year-old September lives in Omaha, and used to have an ordinary life, until her father went to war and her mother went to work. One day, September is met at her kitchen window by a Green Wind (taking the form of a gentleman in a green jacket), who invites her on an adventure, implying that her help is needed in Fairyland. The new Marquess is unpredictable and fickle, and also not much older than September. Only September can retrieve a talisman the Marquess wants from the enchanted woods, and if she doesn’t . . . then the Marquess will make life impossible for the inhabitants of Fairyland. September is already making new friends, including a book-loving Wyvern and a mysterious boy named Saturday.” (Synopsis from Goodreads)

2. The False Prince by Jennifer A. Nielsen (x)

A raved-above medieval fantasy with a trilogy of books to enjoy? Yes please, I will take the lot.

“In a discontent kingdom, civil war is brewing. To unify the divided people, Conner, a nobleman of the court, devises a cunning plan to find an impersonator of the king’s long-lost son and install him as a puppet prince. Four orphans are recruited to compete for the role, including a defiant boy named Sage. Sage knows that Conner’s motives are more than questionable, yet his life balances on a sword’s point—he must be chosen to play the prince or he will certainly be killed. But Sage’s rivals have their own agendas as well. As Sage moves from a rundown orphanage to Conner’s sumptuous palace, layer upon layer of treachery and deceit unfold, until finally, a truth is revealed that, in the end, may very well prove more dangerous than all of the lies taken together.” (Synopsis from Goodreads)

1. The Girl of Ink and Stars by Kiran Millwood Hargrave (x) 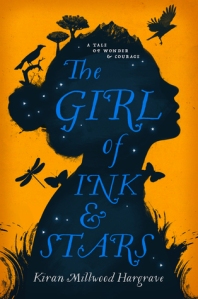 First of all, let us all take a very important moment to stare at how utterly gorgeous this book’s design is. Done? No, ok then, take another minute. Done now? Fantastic, because here’s the book’s synopsis which, I think you’ll agree, is pretty damn amazing and persuasive:

“Forbidden to leave her island, Isabella Riosse dreams of the faraway lands her father once mapped. When her closest friend disappears into the island’s Forgotten Territories, she volunteers to guide the search. As a cartographer’s daughter, she’s equipped with elaborate ink maps and knowledge of the stars, and is eager to navigate the island’s forgotten heart. But the world beyond the walls is a monster-filled wasteland – and beneath the dry rivers and smoking mountains, a legendary fire demon is stirring from its sleep. Soon, following her map, her heart and an ancient myth, Isabella discovers the true end of her journey: to save the island itself.” (Synopsis from Goodreads)

And there we have it folks – those were my top 5 children’s/middle-grade books on my TBR. Do you agree/disagree with my choices? Which children’s books do you love? Do you still read the genre and enjoy it? And if you have a Top 5 Wednesday list, be sure to link it below – I’d love to take a look!