This post marks a first for this blog – my very first unboxing post! I have a fraught relationship with the very idea of subscription boxes because, whilst I like a good bookish surprise, the thought of potentially throwing away £30 on a box which might include things I don’t like is not at all appealing. Also, most subscription boxes are US-based which means extortionate shipping fees to the UK on top of the already not inconsiderable price of the box – not exactly appealing. But, I make an exception – and that is for the UK-based YA fantasy based subscription box, Fairyloot.

Fairyloot is a UK-based subscription box with a monthly theme which the products of center around. Boxes contain a new YA fantasy release and 4-6 bookish goodies and each box is so beautifully packed you won’t want to ruin the prettiness by unwrapping it! Boxes frequently feature signed bookplate and a letter from the author, as well the beautifully designed Fairyscoop newsletter – even the packing list containing details of all the products is carefully designed and curated. I’ve received 2 boxes so far, and have purchased another 1, and I’m constantly amazed by the care and passion which seems to go into every item in every box.

So, when I heard the October theme was ‘Villainous’ I just couldn’t say no. Fairyloot’s release blog said it best: “Oh, it’s so good to be bad, and there is no better time to be bad than in October! This box is for all the villain lovers out there because the October ‘Villainous’ box is inspired by our favourite fictional villains! Every villain is the hero of their own story, isn’t that right? There will be items inspired by The Young Elites, Harry Potter, Sherlock and much more!” Who could say no to that?! I was even on holiday in DC when they went on-sale and I had to risk a pre-planned itinerary item (the US Capitol tour) in order to get up early and grab my box before they sold out. It was well worth that stressful half-hour, though, because the box was brilliant. Here’s a little peek at all the bookish goodness I found inside:

First up, the main deal, because even the box is exciting and pretty. Besides, everyone loves a good quote about fairy tales and dragons, right? And in October’s box we were spoilt because it featured not just one but two stunning books. And one of them was a book I was already highly-anticipating, Leigh Bardugo’s The Language of Thorns with a cover exclusive to Fairyloot. The production quality on the book is stunning, to say the least. The main event, the main book, is a dark YA fantasy from Julie C. Dao called Forest of a Thousand Lanterns. It promises to be a “dark and mystical East Asian fantasy reimagining of The Evil Queen legend about one peasant girl’s quest to become Empress” – sounds intriguing and I’ve heard nothing but great things about the world building and writing in this so I’m excited to get to it. Considering its protagonist is billed as an anti-heroine, it’s no surprise that it takes pride of place in a Villain themed box.

Every box has the monthly newsletter, the Fairyscoop, a letter from the featured book’s author, and the item card which tells you all about the products. I can’t even begin to describe the production quality on all of these simple items. It would be so easy for a subscription box to half-ass the additional material and only focus on the items themselves but, indeed, part of the reason I’ve quickly come to love Fairyloot is because they don’t – they put care and thought into each and every single little thing that goes inside that box. 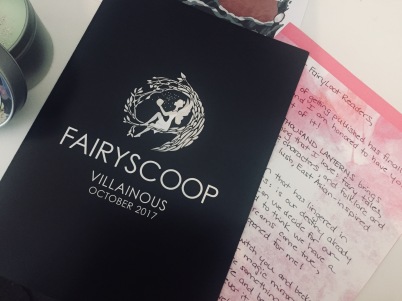 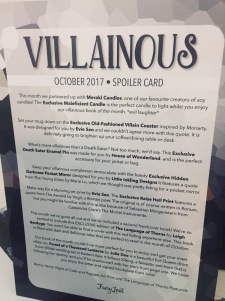 Speaking of gorgeous prints, the front of the spoiler card and the matching bookmark feature a beautiful illustration of a suitably villainous looking individual – I do love me a good dark and sinister looking illustration! Also included are these pretty postcards featuring scenes from The Language of Thorns – just like the book they are so pretty and I can’t wait to read Bardugo’s book and appreciate them all the more.

Now we come to the real goodies – the print and the exclusive bits and bobs specially curated for the month’s villain theme. First up, a beautifully designed quote print by Evie Seo from Virgil’s The Aeneid: “If I cannot move heaven, I will raise hell”. Just before my box arrived I was looking on Pinterest for inspiration for my own dark queen fantasy novel idea and I came across this quote and was just thinking that I wished I had it as a pretty quote – Fairyloot must be psychic! I am definitely going to get a frame for this one asap so it can sit on my desk. You’ll also see next to it a really cute print of a couple from ‘Night of Cake and Puppets’ which I know is a standalone companion to Laini Taylor’s Daughter of Smoke and Bone trilogy, but I kind of don’t want to investigate further than that or it might spoil the series for me since I’ve only read book 1!

Also included was a cute little mirror from Little Inkling Designs which features the quote “everyone has darkness inside them, however hidden” which is apparently from Marie Lu’s The Young Elites – I haven’t read the book but I like the sentiment of the quote! Likewise, I ADORE the cute enamel pin created by House of Wonderland and it is perhaps the cutest Dark Mark design I have ever seen. Evil but cute!

And, the promised exclusive candle from Meraki Candles is next up. It’s a beautiful green coloured candle and it even had glittery sparkles on the top but not so fast, the prettiness has a dark side as this candle is actually Maleficent-inspired – suitably dark and villainous! Similarly, the final not-so-little goodie was a coaster, beautifully designed by Evie Seo, which features a quote from Moriarty in the BBC’s Sherlock: “Every fairy tale needs a good old-fashioned villain” – well said! 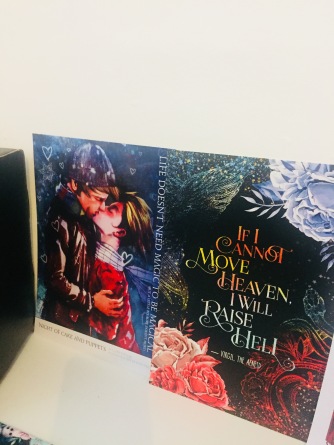 As you can see, Fairyloot is always jam-packed of bookish goodness and I loved pretty much every single item in this box. It’s always so thoughtfully designed and curated and I LOVED October’s ‘Villainous’ theme so much that I’m now likely to be a loyal customer of Fairyloot’s for many months to come. If you’re interested in the items I unboxed here, or a fan of YA fantasy, or just intrigued by the idea of this subscription box, then I’d definitely recommend you keep an eye out for the theme of next month’s Fairyloot box on their website and Twitter – the team behind Fairyloot are so enthusiastic and passionate about their product and super friendly on social media that I definitely do not hesitate to recommend heir boxes in this unboxing post!