It’s been a short while since my last book haul back in September but have I learnt and stopped buying books? Nope! This book haul includes the spoils of a trip to New York (specifically The Strand), as well as my usual ‘accidental’ book purchasing via Amazon and in Waterstones. As of late (after this book haul actually) I’ve actually been really trying to limit my book buying and to ask if I realistically will read this book anytime soon – if the answer is no, I put it back, or delete it from my basket, and move on with life. It’s a good general tactic but we’ll see how I fare once it gets into the Christmas season and the nights get colder and darker and all I want to do is buy books and curl up with my hoard of them in my living room. 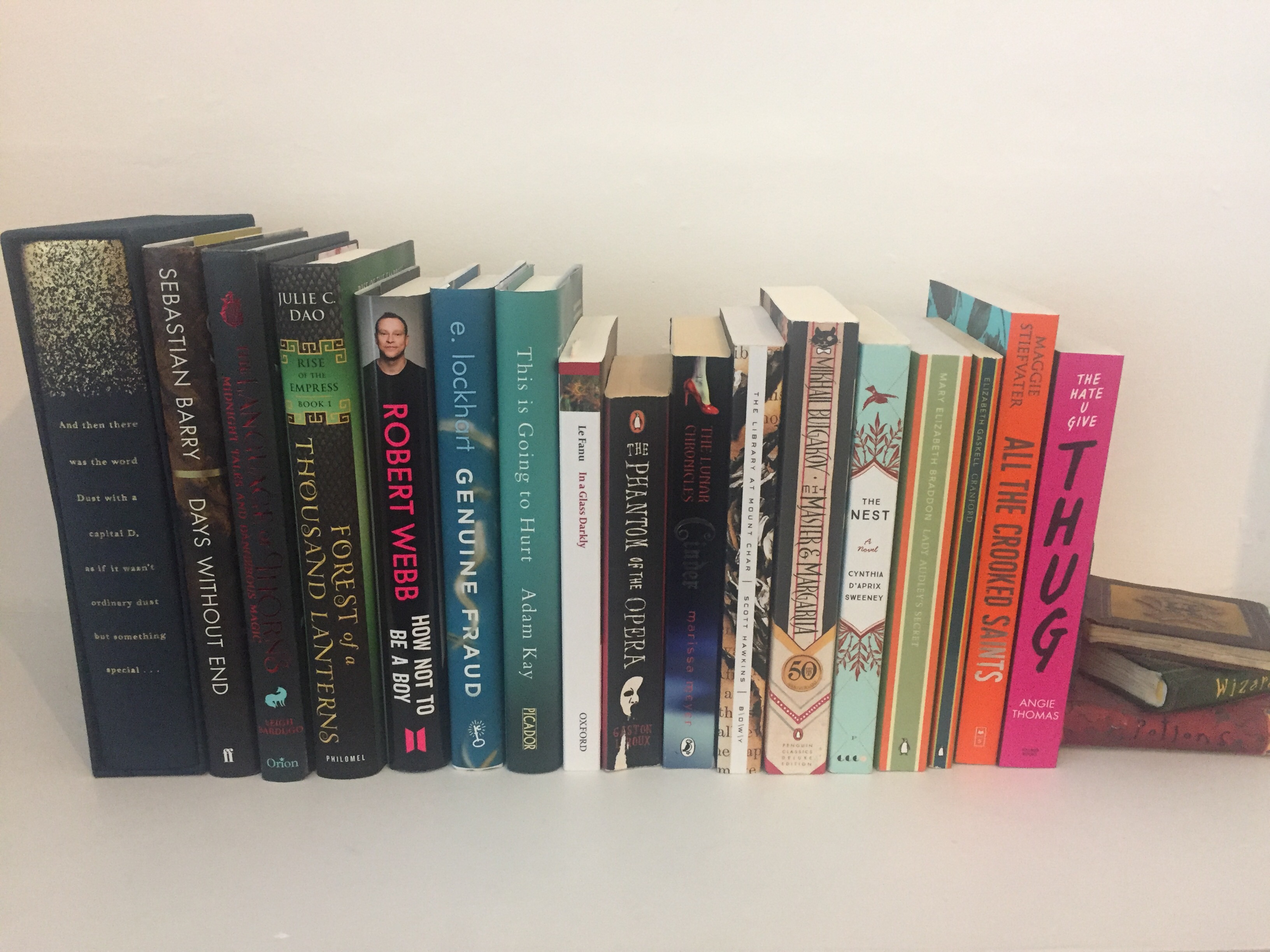 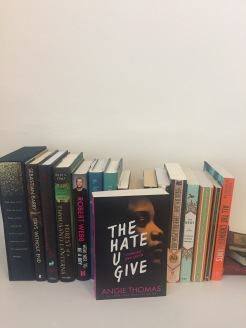 The Hate U Give by Angie Thomas
I caved, guys, I finally caved and just bought this book – the fact it was a whole £2 on Amazon probably helped its case, mind you – even though I’m sure it will take me weeks/months to actually getting around to reading it. The hype for this book is unreal and, I’m sure, very deserved but… I just have a horrible, horrible sinking feeling that I won’t “get” this book as much as everyone says I will, which makes me hesitant to try it. I don’t really do contemporaries much but since this allegedly has such an important message I really should just get over that and give it a go!

All the Crooked Saints by Maggie Stiefvater
It’s a new Maggie Stiefvater book so of course I had to pre-order it. I foolishly thought that if I bought this I would finally have another Stiefvater to read so I’d finally be able to persuade myself to read the last Raven Boys book. Needless to say that hasn’t happened but, hey, it’s early days… relatively speaking, anyway. I have next to no clue what this book is about but that’s often the best way to go into a Stiefvater novel because the synopses rarely make sense anyway! 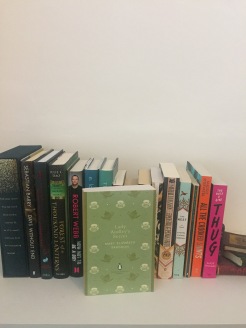 Cranford by Elizabeth Gaskell
I’ve previously very much enjoyed other novels I’ve read by Gaskell (North and South is even one of my all-time favourite classics), and this one is so short in length and basically a collection of short stories that it doesn’t seem daunting at all. Plus I really want to get around to watching the BBC series adaptation so I really ought to read the source material first and then use the TV series as a reward once I’ve finished it, not that I need the enticement!

Lady Audley’s Secret by Mary Elizabeth Braddon
I’ve read this book once before for a Victorian literature class and I really enjoyed it. It was silly and scandalous and it was excellent for both of those things. I’d really like to re-read it not in an edition that makes me weep at how ugly it is (seriously though, the old Oxford World Classics cover design is so dull that I almost fell asleep just looking at it) so I bought this lovely Penguin English Library edition to add to my growing collection. I blame Lucy the Reader entirely for this purchase. 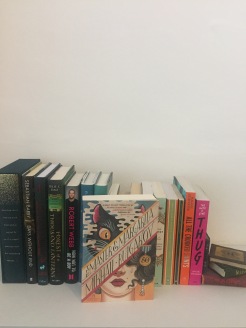 The Nest by Cynthia D’Aprix Sweeney (The Strand)
When in The Strand, it seemed impossible for me to leave without buying a book, or two, or three (and a tote bag). Still, I’d went all the way to America to book shop so I made sure to check if they had a couple of books that I wanted to read and that I preferred the US covers of – this was one of those books.

The Master and Margarita by Mikhail Bulgakov (The Strand)
I have a few of these deckle-edged Penguin Deluxe Classics and I adore them – but I’ve really struggled to find a copy of this Bulgakov novel in the UK. So, when I was in America, I had to pop into The Strand and check to see if they had it in stock – luckily, they did, and I had to nab it because I’ve been coveting this amazing cover for so long. The story inside it sounds, frankly, batshit crazy – I look forward to reading it. 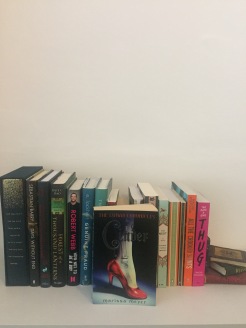 The Library at Mount Char by Scott Hawkins (The Strand)
Much like The Nest, this was a Strand purchase made out of necessity – I’m not sure I’ve ever seen this book in a UK bookshop so I had to take advantage of its presence. I’m very confused about this one’s premise – is it a thriller, is it fantasy, is it horror? If I’m honest, it sounds a little bit darker and weirder than I generally go but it’s not necessarily a bad thing to try out something like this every once in a while. Plus the title had the word ‘library’ in it… I mean, how could a book lover resist that oh so simple ploy?

Cinder by Marissa Meyer
Something of an impulse buy – I spotted a copy of this in the Oxfam bookshop after I’d picked up Sebastian Barry’s book and was just so shocked to see a YA book in a charity bookshop that I bought it. I have a copy of this on Kindle but I never got further than book 2 in the series so I’d like to finish it someday and owning this physical copy serves as a visual reminder of that desire. 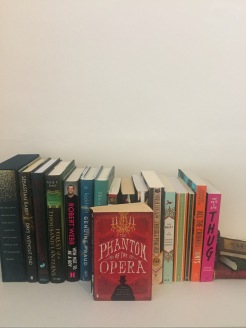 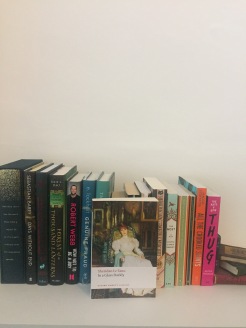 The Phantom of the Opera by Gaston Leroux
Whilst in New York, I went to see Phantom of the Opera on Broadway which was an experience and a half to say the least – especially when it is a very operatic performance so you struggle to make out what the words they’re singing are, and everyone around you is rustling so you only hear every other word anyway – but it reminded me, yet again, that I’d like to read Leroux’s original novel. I’ve heard only so-so things about it but I really ought to get around to reading it one day and I think I’ll really enjoy it so fingers crossed!

In A Glass Darkly by Sheridan Le Fanu
As a misguided attempt to actually not fail at #victober, I branched out to find some spooky/Gothic reads and this is one of them. I was originally just looking for Carmilla on its own but when I saw that it was bound up with other short stories in this collection I thought ‘why not?’ and bought the lot. I’m still yet to read it though, despite it being almost the end of October and therefore #victober. Yikes! 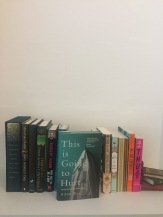 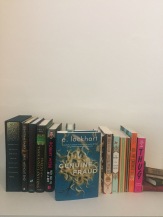 This Is Going To Hurt by Adam Kay
I don’t know why but Twitter is where I accidentally get non-fiction/memoir recommendations nowadays and Twitter was abuzz with publicity about this book in the run up to its release. Although I have family members who work/worked in hospitals, I have no clue what the medical profession is like, so this memoir about what it’s really like to work crazy hours as a junior doctor will provide me with a much-needed insight into the healthcare profession.

Genuine Fraud by e lockhart
I’m a sucker for buzz, clearly, and any new e lockhart book is bound to generate a lot of buzz in the YA book community online. So I ordered this because I was intrigued, as always, by its premise… and it has sat on my book pile and done precisely nothing since release day – c’est la vie! We Were Liars was astounding to me – I’d never inhaled a book quite as compulsively as I did that novel since, well, probably Harry Potter so I’m hoping to have a similarly immersive experience with Genuine Fraud too. We shall see!

How Not To Be A Boy by Robert Webb
Once again, Twitter strikes again! Whilst idly scrolling through Twitter one day, I saw that Robert Webb was talking about launch events for this book and I thought ‘well hey, I didn’t even know he’d written a book’ and that thought quickly spiralled downwards into me adding this book to my ‘to read’ shelf, looking it up on Amazon, buying the audiobook on Audible, and then ordering a physical copy of it from Amazon. I don’t know what happened, really, but I’m glad to see it has received positive reviews about its look at gender otherwise that would have been somewhat awkward… 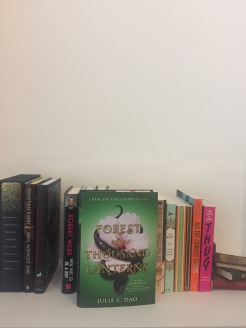 Forest of a Thousand Lanterns by Julie C. Dao (FairyLoot)
Next in a long line of impulse purchases, we have Fairy Loot! When I saw October’s theme was ‘Villains’, I couldn’t say no… the fantastic October box (which I will be doing an unboxing of soon so stay tuned!) featured this intriguing looking debut from Julie C. Dao whose striking cover promises an Asian-fantasy reimagining of The Evil Queen story. I know nothing about the origins of the Evil Queen story as recorded by the Brothers Grimm so this retelling, for me, will seem rather original! Lately, I’ve been musing on my own ideas for a dark queen story (I’d probably take a stab at it for NaNoWriMo this year if it was already more developed) so reading existing novels that focus around this concept will definitely be constructive and super inspiring too.

The Language of Thorns by Leigh Bardugo (FairyLoot)
As if the October ‘Villains’ box couldn’t have been any better after the featured book and the swathe of bookish goodies, it also included a super shiny, super exclusive edition of Leigh Bardugo’s latest release, The Language of Thorns with RED FOILING on the NAKED HARDBACK. Why would I say no to that?! That hits like 2 out of 3 of my favourite things on covers ever.

Days Without End by Sebastian Barry
Encouraged by the glowing praise heaped on it by Simon from Savidge Reads, when I saw this hardback for cheap at an Oxfam bookshop, I had to have it. Its pedigree is pretty good, to be fair – it was longlisted for the 2017 Man Booker Prize and won the Costa Book of the Year – but it is set in a location and a time period that I don’t read much from at all. That’s not necessarily a bad thing, though, and sometimes looking outside your comfort zone can lead to some real gems so hopefully I’ll really enjoy this story.

La Belle Sauvage by Philip Pullman
I don’t think it was possible to escape the publicity for this book in the run up to its release – like I’m pretty sure it was flat-out impossible. I rather impulsively made a rash pre-order of the special limited edition of this (yes, I am easily swayed by the promise of a signed, naked hardback with gold foiling) but I dare not try to read it in case I ruin the pretty cover. Also, I need to actually finish reading The Amber Spyglass first which I DNFed way back when, when I wasn’t a very persistent reader. This may have been the more impulsive/stupid of my purchases but I regret nothing – look at how beautiful it is, I mean, come on, even its spine features a beautiful foiled quote on it!