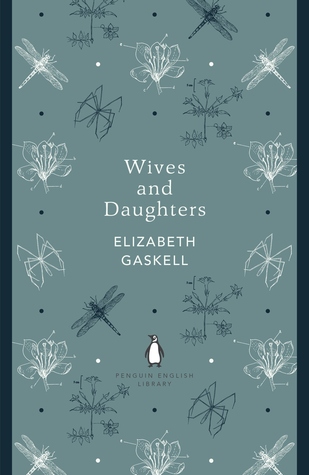 “Seventeen-year-old Molly Gibson worships her widowed father. But when he decides to remarry, Molly’s life is thrown off course by the arrival of her vain, shallow and selfish stepmother. There is some solace in the shape of her new stepsister Cynthia, who is beautiful, sophisticated and irresistible to every man she meets. Soon the girls become close, and Molly finds herself cajoled into becoming a go-between in Cynthia’s love affairs. But in doing so, Molly risks ruining her reputation in the gossiping village of Hollingford – and jeopardizing everything with the man she is secretly in love with.”
(Synopsis from the publisher)

I read Wives and Daughters during the Victober readalong and I purposely drew up a schedule for this book so that I could pace myself and the book and read a few chapters every day. I think that doing so really aided my enjoyment of the book because I felt like reading about the life of Molly Gibson and her family and friends became part of my daily routine. I dipped in and out of the paperback and audiobook editions (as read by Prunella Scales) and I have to recommend this tactic if you’re a little unsure with classics, particularly with relatively lengthy ones like this one.

To the characters: Molly Gibson is an absolute delight. Relatable and charming, it’s easy to like her from the very get-go, when we meet her as a child put in a socially uncomfortable situation and just trying her best not to cry. Through the novel I feel like we grow up alongside Molly and she is a character who is easy to empathise and sympathise with. I found myself rooting for Molly immediately. Her father, too, was a delight; although there are a couple of slightly questionable things that Dr Gibson thinks and says (though his sarcasm is cutting and brilliant), he’s mostly just trying to do right by his daughter and, in a story in which some of the men (looking at you, Mr Preston) make you lose faith in mankind as a whole, that’s all you can really ask for of a widowed father. One of his more questionable decisions is to remarry – although the logic of wanting to have a chaperone (aka a mother) for Molly is sound in principle, in practice it brings a widowed Hyacinth/Clare Fitzpatrick (soon-to-be Mrs Gibson) into the fray and she proves to be reprehensible due to her selfishness and shallowness. She cares not one jot for Molly’s happiness when it comes down to it, but she’s not an over-the-top cackling evil stepmother, she’s just a little self-centred. With her father concentrating on his practice as a doctor, and a self-centred mother left at home, it’s no surprise that this lack of parental support means Molly has very few people to turn to when the going gets tough, resulting in a lot of introspection and moral conundrums.

“I won’t say she was silly, but I think one of us was silly, and it was not me.”

I must admit that for all I enjoyed the relationship between Molly and her new stepsister, Cynthia (who is beautiful, charming, irresistible to all men, naturally), there were also times at which I just wanted to shake Cynthia. She seemed to know exactly what she was doing but she let the events play out anyway, knowing full well they could have consequences. Because the narratorial position places you over-the-shoulder of Molly, however, you feel her indecision and turmoil as she tries to do her best for Cynthia in resolving some of her more mixed-up entanglements – I think it’s because of this that I felt frustration with Cynthia’s characterisation sometimes. But, in many ways, that felt like “the point” that Gaskell was trying to make – and make it she did. The big conflict and drama in this novel isn’t between beautiful heroines and cackling villains locked in an epic battle. It’s about personal relationships and familial dynamics; unsurprisingly, it’s about wives and daughters. That’s not to say there aren’t major points of conflict – this book features, in no particular order, scandal, blackmail, death, politics, money worries, secret marriages, and secret children.

“I would far rather have two or three lilies of the valley gathered for me by a person I like, than the most expensive bouquet that could be bought!”

I won’t spoil everything of the relationships in the novel but I will say that Roger Hamley is a precious (but still flawed) character and I’m extremely grateful to Elizabeth Gaskell for writing complex characters that are allowed to make mistakes and questionable decisions, even if you suspect from the very off that you’re meant to root for them when all is said and done. I constantly rooted for Roger and my heart ached when I learnt that Gaskell died before finishing the novel, even if some efforts have been made to finish it off in what people hope is the fashion she would have liked. Roger Hamley may not be put on a pedestal with the likes of romantic leads from other classics (like Mr Darcy for instance) but he should because the easy friendship, and then slow burn of genuine love, between him and Molly is sweet and caring and their relationship grows despite the ups and downs that the pair of them go on during the course of Wives and Daughters. My heart aches for Molly to have a happy ending.

In conclusion, one of the biggest delights about Wives and Daughters was that even though it was a some 800-page book, it never felt like a chore. Rather, I enjoyed reading it and the pace absolutely matched the action perfectly – I truly felt like I was on a journey with Molly Gibson as she matured and came up against her own trials and tribulations – and those her nearest and dearest are subjected to. Wives and Daughters well and truly cemented the idea that stories don’t always have to be full of fights and big action scenes because the more contained and interpersonal dramas can be just as powerful to read on the page.

“How easy it is to judge rightly after one sees what evil comes from judging wrongly.”

6 thoughts on “Review | Wives and Daughters by Elizabeth Gaskell”