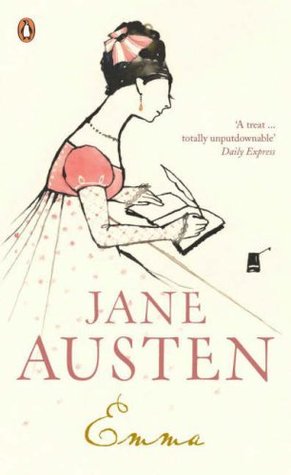 “Beautiful, clever, rich-and single-Emma Woodhouse is perfectly content with her life and sees no need for either love or marriage. Nothing, however, delights her more than interfering in the romantic lives of others. But when she ignores the warnings of her good friend Mr. Knightley and attempts to arrange a suitable match for her protégée Harriet Smith, her carefully laid plans soon unravel and have consequences that she never expected.” (Synopsis from the publisher’s website)

Jane Austen’s Emma is a book I have a chequered past with. Given that Emma Woodhouse is one of the few literary namesakes I have (a shout-out also goes to the differently despicable Emma Bovary), it always seemed a little silly to me that, of all Jane Austen’s books, this would be the one that I struggled to read. But struggle I did, and struggle do a lot of people – understandably so, as Emma Woodhouse is not an easy heroine to root for. Unlikely the heroines of Austen’s other novels, Emma Woodhouse is not in the precarious position of needing to marry in order to secure her future. Rather, Emma Woodhouse is the spoiled daughter of a well-to-do family and she’s perfectly content to go through life enjoying her position as woman of the house (of her father) due to her sister’s departure to matrimony and her mother’s untimely death when she was younger. Emma enjoys a privileged position in not only society but also in this book and it’s because of this that she can be completely insufferable, from the very first page. In fact, it’s only because I have watched a few different adaptations of Emma that I’ve become to be enamoured with her insufferable nature and instead find her meddling in the lives of others to be somehow endearing.

“Were I to fall in love, indeed, it would be a different thing; but I have never been in love; it is not my way, or my nature; and I do not think I ever shall.”

Tricky to like heroine aside, the characters of Emma are hilarious, with varying levels of self-awareness of this fact. Emma’s father, Mr Woodhouse, is a hypochondriac, doddering old man who, bless him, means well but can likewise come across as overly concerned about everything. Once you appreciate the story, it’s easy to see that he’s simply a man who wants to keep his precious family close and healthy for as long as possible. When Emma’s governess, Miss Taylor, departs Hartfield at the start of the novel to be married to Mr Weston, both Mr Woodhouse and his daughter lament the loss of her companionship. For this is a novel about families, of separation, of joining, of children being taken away and raised elsewhere – for all its humour, it also carries with it an undertone of loss somehow. This slightly more sobering tone is, however, leavened with a lot of humour as Emma finds herself unable to not meddle in the love lives of others, and this, coupled with her want of female companionship after the departure of Miss Taylor from her household, leads to her forming a fast friendship with Harriet Smith, an orphaned, plain, but otherwise “delightful” girl in the nearby village of Highbury. The story unfolds from there as Emma becomes embroiled in finding a suitable match for her new-found friend.

“I lay it down as a general rule, Harriet, that if a woman doubts as to whether she should accept a man or not, she certainly ought to refuse him.”

For one, we have the honest “down to earth” farmer, Mr Martin, whose family Harriet is close with but who Emma, in a fit of such characteristic snobbery, (wrongly) deems utterly beneath Harriet. Her extremely persuasive entreaty to Harriet to think of more worthy men introduces into the story then the large crux of its plot. Elsewhere, we have would-be suitor Mr Elton who consistently makes me feel uncomfortable and it’s painful how Emma somehow remains oblivious to his true intentions for any length of time, considering how much of a judge of human character she considers herself. I suppose this is the greatest amusement in Emma – how blissfully unaware the central character is of her own shortcomings or (wilful) misapprehensions of the affairs of her own heart. Speaking of which, Frank Churchill is a character who I will forever find distasteful simply for the elusive nature of his character, I don’t find the reveal of his intentions to be at all justified, even though I know it’s wholly necessary for the plot to unfold as Austen would like. For someone who is forever painted as the apple of his father, Mr Weston’s, eye (and whose external circumstances largely dictate his limited actions), I find his “charm” to be not all that charming, nor all that excusable when all is said and done.

“Nobody, who has not been in the interior of a family, can say what the difficulties of any individual of that family may be.”

And the foil to Emma is, of course, the hero of this piece: Mr Knightley. A long-time family friend to the Woodhouses, the Knightleys also enjoy a connection through marriage as Knightley’s brother John is married to Emma’s sister Isabella, meaning Miss Woodhouse and Mr Knightley knock heads quite often – they’re both not afraid to say what they think (with differing levels of petulance, admittedly) so it’s unsurprising that the rapport between the two is such delightful fun to read. I will maintain that the scene where Knightley bluntly tells Emma that one of her slightly more interfering bouts of meddling was “badly done” is one of the more emotional and powerful bits of character development I’ve read in a Jane Austen novel – and the 2011 adaptation, which I so love, stages this perfectly. I don’t think on any of my previous attempts to pick up this book I had truly appreciated Knightley as an Austen hero, but now he’s up there with the best of the best in my head, simply because of his obvious devotion to the Woodhouses and to making sure that Emma is not only cared for, but also chastised, when she ought to be, because she’s not doing herself proud.

“Better be without sense than misapply it as you do.”

Ultimately, Emma is a novel that is fully intended to split its readers: I’d say a large portion of whether or not you end up enjoying Austen’s novel rests on how you end up feeling about its titular character. Austen purposely created a heroine who it’s very hard to love unequivocally. It’s hard to not end up wanting to shake her hard by the shoulders for her meddling, it’s hard to not instinctively side with Knightley when he tells her she’s wrong to have behaved in the way she did, it’s hard to not kind of hate her at times but that, in itself, is the beauty of this novel. I’m so very glad I gave this another chance having went back to Emma after watching the film and television adaptations that have sought to portray all their characters in their best (and worst) lights and, in particular, I owe a great debt to the 2011 adaptation which showed be the humour to be found in the story, a humour which was always present in Austen’s original text but I had never fully appreciated until I completed the novel for myself.

“The real evils indeed of Emma’s situation were the power of having rather too much her own way, and a disposition to think a little too well of herself; these were the disadvantages which threatened alloy to her many enjoyments. The danger, however, was at present so unperceived, that they did not by any means rank as misfortunes with her.”